The Mettnau is a peninsula in the western part of Lake Constance , east of the city of Radolfzell . It is located between the Markelfinger Winkel in the north and Lake Zell in the south and is 3.5 kilometers long and up to 800 meters wide and measures 180 hectares.

A large part of the peninsula is a nature reserve : The NSG peninsula Mettnau , which also includes the small love island offshore to the south , is looked after by the Naturschutzbund Deutschland (NABU) on behalf of the Freiburg Regional Council.

Mettnau and upstream love island in winter with icy water surface and ice-skaters (February 2006, direction of view northwest); in the background Radolfzell 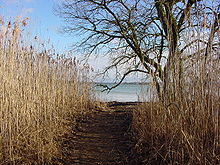 The Mettnau was designated as a nature reserve as early as 1926 on the initiative of Radolfzell's mayor at the time, Otto Blesch , making it one of the first in Germany, but it was not expanded to its current size of 140 hectares until 1984 . As a result of a pond that was accidentally created during backfill work, the peninsula has developed into the most important breeding area for water birds in the region , along with the Wollmatinger Ried near Konstanz . The pond is independent of the water fluctuations in Lake Constance, which makes it a safe breeding place , especially for duck species . In addition, it is close enough to the nutrient-rich shallow water zones of the Markelfinger Winkel, which provide enough food for the offspring.

The outermost tip of the peninsula, also called Mettnauspitze, is closed to hikers and walkers by the NABU Nature Conservation Center Mettnau between April 15th and August 31st by closing the gate from the Mettnau tower in order to ensure the trouble-free brood and young rearing there to ensure living rare birds.

The spa area is located on the front half of the peninsula. In addition to the Werner Messmer Clinic located there, there are buildings for the Mettnau cure, one of the most important and traditional centers for movement therapy in Germany, and the Scheffelschlösschen , the former villa of the poet Joseph Victor von Scheffel . Today this is the seat of the spa administration. Next to the lido and a restaurant there is a jetty, which is called by the Lake Constance shipping company . On the rear peninsula there is a field station of the Radolfzell ornithological station and the Mettnau tower ( called the Ludwig Finckh tower until a few years ago ). On the very tip of the peninsula there is also the not publicly accessible Viktor von Scheffel monument, a small monument.

Nature reserves in the district of Constance