Niklas Oskar Bäckström (born February 13, 1978 in Helsinki ) is a former Finnish ice hockey goalkeeper and current coach . He started his career in his home country and celebrated the Finnish championship with Kärpät Oulu in 2004 and 2005 . He then moved to the National Hockey League , where he played over 400 games for the Minnesota Wild and was briefly used for the Calgary Flames . In the jersey of the Wild, in which he still holds numerous franchise records, he led the NHL in 2007 in the categories conceded goals and catch quota and was therefore awarded the William M. Jennings Trophy and the Roger Crozier Saving Grace Award . With the Finnish national team , he won the silver medal at the 2010 Winter Olympics . Bäckström has been part of the Columbus Blue Jackets coaching staff since 2019 .

He began his professional career in Finland in 1996 at Helsingfors IFK . In 2000 he moved to SaiPa Lappeenranta within the Finnish league . The 2001/02 season he went to Sweden to play in the Elitserien for a year for AIK Solna . He then returned and played for Oulun Kärpät for four years and was able to celebrate the Finnish championship there in 2004 and 2005.

At the 2006 Winter Olympics in Turin , he won the silver medal with the Finnish national team . At the 2006 World Cup he was nominated as the third goalkeeper and took over the role of back-up for Fredrik Norrena after the failure of Antero Niittymäki .

Bäckström in the Minnesota Wild jersey (2011)

In June 2006, signed Bäckström as a free agent a one-year, to 750,000 US dollars doped entry contract with the Minnesota Wild in the National Hockey League . There he should act as a competitor for Josh Harding , who was actually set to replace Manny Fernandez . Harding was injured before the start of the season and Bäckström took on the role of second goalkeeper. After his recovery, Harding was transferred to the Minnesota Wild farm team . On October 7, 2006, Backström made his NHL debut against the Nashville Predators . Since Manny Fernandez had already conceded three goals after 20 minutes, Bäckström was on the ice at the beginning of the second period. Bäckström had to accept two goals from 19 shots in the remaining 40 minutes, but Minnesota won the game 6-5. The first game in which he was used as a goalkeeper from the start, Minnesota lost 3-2. But Bäckström could show 35 saved shots.

When Fernandez was out for a long time due to a knee injury, Bäckström took over the position as number one and showed excellent performances. He was alternately backed up by Harding or Fernandez, whose recovery was very delayed. In the regular season he ran on 41 games, achieved a goal against average of 1.97, a catch rate of 92.1% and five shutouts , which brought him to the top of the league.

In the summer of 2007 - before the end of his contractual relationship with the Minnesota Wild, which would have made Bäckström a free agent - he signed a contract with the Wild for two more years.

After Bäckström had not played a competitive game in the 2015/16 season until February, he was handed over to the Calgary Flames together with a six- round vote for the NHL Entry Draft 2016 and thus left the organization of the Minnesota Wild after almost ten years. In return, David Jones moved to Minnesota. On March 20, 2016, Bäckström completed his first NHL game since January 2015 in the 4-1 success of the Flames over the Canadiens de Montréal . By the end of the season he had four missions before he left North America after ten years in his returned to Finland and signed a one-year contract with his youth club Helsingfors IFK in June 2016. He was active there for another year before joining Tappara Tampere for the 2018/19 season. He then ended his active career and switched to the Columbus Blue Jackets as goalkeeping coach for the 2019/20 season , so that he returned to the NHL. 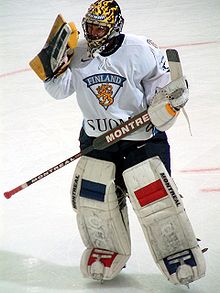 Bäckström in the jersey of the Finnish national team