San Miguel de Tucumán is the capital of the smallest Argentine province of Tucumán with 548,866 inhabitants (2010, INDEC ).

The city was founded in 1565 as San Miguel de Tucumán y Nueva Tierra de Promisión . The origin of the name Tucumán is controversial. The explanation that the name is derived from an alleged Quechua word Yucuman (“place where the rivers arise”) is not tenable. Another interpretation derives from an even earlier time: According to this, it is said to have been the indigenous people of the region, the Diaguitas , who named the area after their chief Tukma (Tukma-nao = people of Tukma) before the invasion of the Incas . A third derivation connects the origin with the Lule Indians also living in the area, who are said to have named the country after the beetle Tuku-Tuku : Tuku-tuku-manita means "land in which the Tuku-Tuku (beetle ) occurs frequently ".

With San Miguel the Archangel Michael is meant. 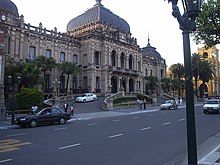 In pre-Columbian times, i.e. before the discovery by the Spanish conquerors, the inhabitants of the area of ​​today's province of Tucumán were strongly influenced by the Inca culture. The Indian group of the Diaguitas-Calchaquíes populated the mountainous area of ​​the eastern Tucumán.

A year later, on May 31, 1565, Diego de Villarroel founded the city of San Miguel de Tucumán. Due to the quarrelsome Indians and the poor water quality at the original place of foundation, the governor Fernando de Mendoza y Mate de Luna decided on September 27, 1685 to relocate and re-establish the city. In 1776 Tucumán became part of the viceroyalty of the Río de la Plata . 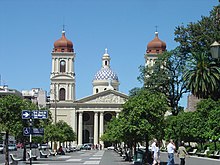 After the events of May 25, 1810 in Buenos Aires, when the citizens of the city rebelled against the viceroy, Manuel Belgrano came to Tucumán in 1812 . There he defeated the royal troops on September 24th of the same year in the Battle of Tucumán. Four years and more battles later, on July 9, 1816, the Tucumán Congress declared the independence of the United Provinces of the Río de la Plata (forerunner of Argentina) from Spain in the building now known as Casa Independencia .

In 1969 the guerrillas, which had been gathering in small groups years earlier, became stronger and there were many attacks in Tucumán.

On September 4, 1970, Carlos Imbaud took over the post of governor in Tucumán for the second time, after having held it temporarily in 1962. Imbaud tried to involve various political parties and the trade unions in his politics. However, this did not have the desired success, and so the year 1970 was again marked by violent unrest and the guerrilla groups Montoneros and ERP Revolutionary People's Army began with their armed actions and assassinations.

55 percent of the provincial population of Tucumán live in San Miguel and the immediate vicinity, around 90 percent live in the wider catchment area in the lowlands on a north-south axis of around 80 kilometers between El Cadillal and Juan B. Alberdi . 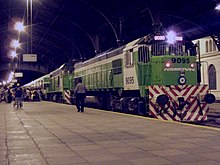 Tucumán used to be an important center of the Argentine rail traffic. In Tafí Viejo there was a large, now closed railway works. Today, with the exception of the route to Buenos Aires, passenger traffic has come to a standstill.

Local public transport is handled by buses that also go to the surrounding towns.

The Aeropuerto Internacional Teniente General Benjamín Matienzo airport is located east of the city near the suburb of Alderetes . From here there are flight connections to Buenos Aires and Córdoba .

The bus station is two kilometers east of the city center. Most of the long-distance passenger transport and part of the local transport are handled from here.

A bypass motorway runs around Tucumán. The city is still connected to several cities in the northwest and northeast as well as the Pampa region by national roads. The most important of them is the Ruta Nacional 9 , also called Panamericana (it is part of the Panamericana road network , the main axis of which runs through Chile ), which runs from Buenos Aires via Rosario , Córdoba , Santiago del Estero , Tucumán, Salta and San Salvador de Jujuy as far as the border town to Bolivia, La Quiaca .

Municipalities in the province of Tucumán