Savognin ( German , outdated and officially Schweiningen until 1890 , Rhaeto-Romanic Savognin , in the local dialect Suagnign , Italian , rarely used, Savognino ) was a political municipality in the Albula district of the canton of Graubünden in Switzerland until December 31, 2015 . On January 1, 2016, Savognin merged with the municipalities of Bivio , Cunter , Marmorera , Mulegns , Riom-Parsonz , Salouf , Sur and Tinizong-Rona to form the new municipality of Surses .

The village was the capital of the Surses district .

Savognin is a popular tourist destination in both summer and winter. The official language is the Rhaeto-Romanic idiom Surmiran .

The meaning of the name is unclear. In 1154 the place was mentioned as Swainingen , 1156 as Suanneng , 1379 Schweining . Suanin , which can be associated with the non-localized Rhaetian tribal name Suanetes, must be assumed as the initial form . The name Sevgein is of the same origin. 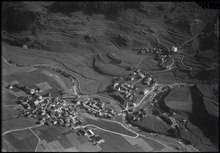 Savognin is located in the middle of the wide Sotgôt basin , the lower part of the Surses valley (Eng. Oberhalbstein ).

The former municipal area comprised a section of the main valley between the Piz Arblatsch (3203 m, highest point of the municipality) in the southwest and the Piz Mitgel (3159 m) in the northeast. As the three old churches testify, the village arose from several cores: on the Julia River , on the gently rising slope on the left and along the main road that rises on the right. The heavy building activity between 1965 and 1975 closed the gaps between the parts of the village and also significantly expanded the settlement area on the right side of the valley.

An important Bronze Age settlement was located on the Padnal hill south of the town . Finds recovered in several excavations show village complexes from different epochs, between 1800 and 1000 BC. A little higher than Padnal lies the Rudnal site , which is believed to be a prehistoric refuge .

Important transit routes have led over the Julier and Septimer passes at least since Roman times . Savognin came into the possession of the bishop in the 13th century . As part of the Oberhalbstein court, the capital and parish of which Savognin developed, the place became a member of the Church of God . With the ransom in 1552, the valley gained full sovereignty within the Free State of the Three Leagues .

Since the Middle Ages, livestock farming and pass traffic have formed the economic basis. After the boom - for example after the Crap Ses was blown up in 1777 and the Julierstrasse was expanded between 1820 and 1840 - setbacks followed again and again, most recently due to the overwhelming competition of the Gotthard Railway, which opened in 1882 . Savognin was thrown back on the level of a farming village and initially missed the connection to the tourist development. In the middle of the 19th century, Yenish families were naturalized on the basis of the law to combat homelessness . It was not until 1960 that it began to become a tourist destination, with the construction of hotels, holiday apartments and cable cars permanently changing the appearance of the town.

Savognin became known, especially among competitors within the Graubünden region, for its first large-scale use of snow cannons from 1978.

Blazon : red, divided by a silver-bordered blue river ribbon, two at the top and a silver bell at the bottom.

The coat of arms symbolizes the location on the river and the three churches of the village.

The original language of the locals is Surmeir , a regional dialect of Rhaeto-Romanic . The community was almost monolingual both in 1880 with 96.2% and in 1910 with 91.61% Romansh speakers. This value then fell to 81.1% by 1941. Since then, Romansh has been losing ground massively through immigration and, since 1980, through language changes. In 1970, 66.59% were Romansh, today around half of the population. The following table shows the development over the past decades:

Romansh is still understood by 70.1% of the population and is the only official language.

As the seat of the district administration, district hospital and secondary school, Savognin forms the center of the valley. 71 people were employed in agriculture, 122 in manufacturing and 423 in the service sector.

The most important branch of business is tourism with around 200,000 overnight stays per year. Several Savognin Bergbahnen cable cars open up the ski areas on Piz Martegnas and in Val Nandro . The Lai Barnagn is dammed up as a bathing lake in the parking lot of the cable car in summer and warms up quickly to pleasant bathing temperatures, which is why it is one of the warmest bathing lakes in the Alps. Savognin is the transit point and (since 2013) the starting point of the Swiss Irontrail mountain run .

Savognin is located on the main road 3 from Chur via Lenzerheide and Julier Pass into the Engadin . A post bus line also runs on this route . Most courses end in Bivio , some of them go as far as St. Moritz . There is another post bus connection to the surrounding villages of Riom , Parsonz and Salouf.

Savognin has three Catholic churches from the baroque period :

The Reformed Church of Savognin is a modern sacred building .

Furthermore, some stately town houses are worth seeing, such as

The Juliabrücke in the Sot Curt part of the village dates from 1682.

The Hotel Cube by architects Carlo Baumschlager and Dietmar Eberle is the youngest building worth seeing, but it has been closed since autumn 2018.

To the west above Savognin, on the slope of Piz Curvér, stands the Ziteil pilgrimage church (highest in the Eastern Alps).

The painter Giovanni Segantini lived in Savognin from 1886 to 1894 and developed his own style there. His landscapes with the Piz Curvér and Piz Toissa mountains in the background became famous . The “Senda Segantini” hike, which lasts several days, combines stations from the painter's life.

Barbara Uffer (1873–1935), the nanny of the painter's family, was also his model and one of the most important people in his life and work. She was born in Savognin.

The trade diplomat Luzius Wasescha , who as ambassador represented Swiss economic interests to the World Trade Organization (WTO) , is entitled to live in Savognin. He had arranged for the second round of negotiations on the free trade agreement between Switzerland and Japan to be held in the Savognin village school in July 2007 .

Political communities in the Albula region