The competition was held for the first time in 1966 under the name Cumhurbaşkanlıği Kupası (German: President's Cup) . It faced each other as Turkish champions Beşiktaş Istanbul and Galatasaray Istanbul as Turkish cup winners. Galatasaray won the game 2-0. In 1968, Fenerbahçe Istanbul won the cup without playing a game. The team was champions and also cup winners, so the game was not scheduled. The same scenario existed in 1973, but this time an opponent was set for Fenerbahçe Istanbul with the Başbakanlık Kupası winner Galatasaray Istanbul. From 1983 onwards, instead of the Başbakanlık Kupası winner, the runner-up was allowed to participate.

Göztepe Izmir became the first team outside Istanbul to win the title in 1970. Besides Göztepe Izmir, Eskişehirspor , MKE Ankaragücü and Trabzonspor did the same. In 1977 Trabzonspor was the first team to win the cup after penalty shoot-outs . Four years later, the cup competition was renamed Devlet Başkanlığı Kupası (German: Head of State Cup) because a military coup was carried out on September 12, 1980 under the leadership of the Chief of Staff Kenan Evren and Cumhurbaşkanı did not rule from 1981 to 1982. From 1983 the term Cumhurbaşkanlıği Kupası was used again. The last game under this name was played in 1998.

After an eight-year break, the 2006 Supercup was reintroduced under the name of Süper Kupa . From 2006 to 2008 the games were played in Frankfurt am Main , Cologne and Duisburg . The General Secretary of the Turkish Football Association Lütfi Arıboğan justified the event in Germany in 2006 by saying that the aim was to offer the many supporters of Turkish football in Germany the opportunity to experience the two best teams of the past season live in a real competition. Since 2009 the competition has only been held in Turkey again. Due to the suspicion of manipulation, the 2011 Supercup final, which was scheduled for October 27, 2011, was postponed to a later date and has not yet been played.

The Supercup games at a glance

2006: The Beşiktaş team after the final whistle.

2008: Galatasaray and Kayserispor just before kick-off. 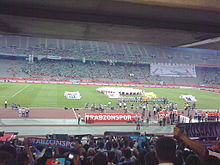 2010: Ceremony before the game between Bursaspor and Trabzonspor.

2012: During the game between Fenerbahçe and Galatasaray.

2018: Ceremony before the game between Akhisarspor and Galatasaray.
→ Main article : List of Turkish Supercup Games