Waldburg is a municipality and a state-recognized resort in the Ravensburg district in Baden-Württemberg ( Germany ).

The community of Waldburg, known for the castle of the same name from the 12th century, is a member of the Gullen community administration association based in Grünkraut .

The community of Waldburg is located on the southern edge of the Altdorf Forest, about halfway as the crow flies between Ravensburg in the west-northwest and Wangen in the east-southeast.

Waldburg on a photograph before 1870

View from the castle to the town, in the foreground on the right the Catholic parish church of St. Magnus 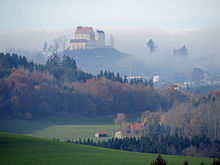 Waldburg from the southeast

Waldburg is shown in the description of the Ravensburg Oberamt from 1836 as a community with 48 parcels and 1163 (Catholic) inhabitants, but it is declared as a "civil place" belonging to the princes of Waldburg-Wolfegg-Waldsee. The first mention of Waldburg by name as a fief came after that, according to Pappenheim's Chronicle in 1402. The monastery Weingarten , the Landvogtei and most of the Truchsess von Waldburg shared their sovereignty. In 1570 part of the village burned down, in 1632 during the Thirty Years' War the forest castle was besieged by the Swedes and the place was sacked, in 1724 a fire set half the village to rubble and ashes.

Like the rest of the surrounding area, Waldburg is Roman Catholic . The parish is the seat of the parish of St. Magnus (with a branch parish of St. Cassian in Hannober), which is part of the Ravensburg deanery. The parish of Waldburg in its current form did not emerge until between 1808 and 1816. The parish, which emerged in the 16th century, only comprised the town itself and three surrounding parcels. The others belonged to the parishes of Bodnegg and Amtzell or were parished by Weingarten Monastery. The records in the Waldburg church registers do not begin until 1700 and later. In 1920 a branch parish was set up in Hannober, which meant that some of the parcels previously belonging to the parish of Amtzell and Vogt were assigned to the parish of Waldburg.

The Protestant Christians in Waldburg are members of the Atzenweiler parish , which is part of the Ravensburg deanery.

The twelve seats of the municipal council have been distributed as follows since the local elections on May 25, 2014:

Blazon : Under a red shield head, inside a golden orb, in gold three striding, red-tongued, peeking black lions (leopards) one above the other.

A partnership with the eponymous municipality of Waldburg (Upper Austria) has existed since around 1980 . 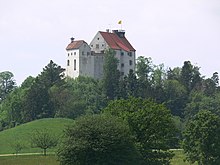 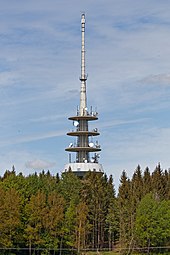 The community is connected to Ravensburg , Schlier , Vogt and Wangen im Allgäu with several bus routes and belongs to the Bodensee-Oberschwaben Verkehrsverbund ( bodo ).

Vom Fass is a franchise company in the retail trade of wines, spirits, liqueurs, vinegars and oils with over 200 locations worldwide. The head office is located in the Waldburg district of Hannober.

Wikisource: Waldburg in the description of the Oberamt Ravensburg from 1836  - sources and full texts