The Arnschwang Castle (also known as Water Castle Arnschwang called) is a Grade II listed building in the Upper Palatinate municipality Arnschwang in the district of Cham of Bavaria (Schloßweg 15).

Around 1173 a Gotefridus de Arinswanch is mentioned for the first time as the Diepoldinger ministerial . The aristocratic family of Arnschwanger can be traced here up to the beginning of the 13th century. In 1352 the Kälbl call themselves after Arnschwang. A calf is mentioned as early as 1285 in a document from the Schönthal monastery , which had got into disputes over goods in Grasfilzing (today a district of Arnschwang). It can therefore be assumed that the Kälbl had ownership rights in Arnschwang early on. From 1392 the Püdensdorfer are resident at the castle. In 1430 ownership passed to the saddle archers on Kaufweg . In 1431 the castle was burned down by the Hussites .

1483 prescribes Siegmund von Sattelbogen to Lichteneck the Duke Albrecht the opening of the castle and promises to make no changes without the approval of the Duke. In 1492 the Hofmark came into the possession of the keeper of Cham, Wilhelm Adelmann von Adelmannsfelden . The jurisdiction of the lord of the castle was limited to the building of the court, Duke Otto , on the other hand, held high and low jurisdiction as well as escort on the road to Bohemia. Georg Adelmann sold in 1496 with the consent of the Elector Arnschwang to Ludwig von Habsberg and Ludwig von Eyb . This Eyb leaves his share to his co-owner in 1510. In 1521 the castle passed to Hans von Hienheim and Walter von Habsbberg . In the same year the man from Hienheim gave his share to his brother-in-law Christoph Fuchs , who in 1527 also bought the other half. 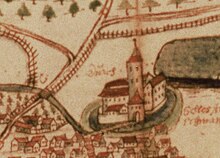 Arnschwang moated castle after an engraving by Michael Wening from 1720

On May 13, 1612, Hans Wilhelm Fuchs sold the palace and Hofmark to the Electoral Palatinate government in Amberg . On June 3, 1626, Emperor Ferdinand II gave Arnschwang to the council and chancellor Joachim von Donnersberg . Arnschwang was sold to Alois Bonaventura by his heirs in 1678 . He gave this property away in 1722 to his godfather Alois von Bonaventura Graf von Kreuth . In 1750 this Arnschwang exchanged for Johann Baptist von Albersdorf . In 1759, Imperial Count Max von Törring acquired the castle estate.

On April 2, 1801, this, together with Ränkam Castle, was purchased by Karl Friedrich Wilhelm Reichsfreiherr von Völderndorf and Waradein . This originally wanted to form a local court here, but in 1815 applied for the formation of a second class patrimonial court . It was not until 1821 that the Ministry of the Interior approved the formation of a first class patrimonial court. In 1826 this came to the state, whereby the property was subsequently "smashed", i.e. H. is sold to private individuals.

Arnschwang water castle then and now

As you can see on the engraving by Michael Wening from 1720, the castle was a two-storey building with a plaster and ribbon structure, which was and is surrounded by two arms of the chamb . Originally the castle was an irregular three-winged building with a walled entrance area with a portal structure. The high tower that existed in 1607 was probably lost during the turmoil of the Thirty Years' War .

What has been preserved is the west wing, a multiple broken and two-storey gable roof building . This is essentially from the time around 1300. Modifications took place in the 15th and 16th centuries and, due to dendrochronological dating, also around 1678. One floor was demolished at the beginning of the 20th century. Remains of the moat are still preserved.

The Arnschwang municipal council had already approved an application by the owner to demolish the dilapidated moated castle, but thanks to a high level of funding from the Bavarian State Office for Monument Preservation , a renovation could be initiated. The moated castle of Peter Mühlbauer, owner of the castle since the beginning of the 20th century, had to be left to the municipality of Arnschwang for at least 45 years by means of a long-term lease. After initial discussions and preliminary investigations by Egon Johannes Greipl in 2008, a concept for the renovation of the facility was developed. This was followed by a three-year repair, so that in 2012 the renovated building could be made available to the general public. The premises should be available for private individuals, associations, organizations, artists, senior groups and the community for festive occasions.