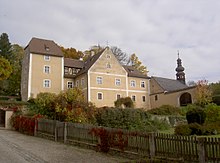 The Castle Waffenbrunn is in the same Upper Palatinate municipality Waffenbrunn in the district of Cham of Bavaria (Castle Height 1-5).

A knightly family named after Waffenbrunn has been known since the end of the 13th century . In 1297 a "Friedericus junior de Bossenbrun" appeared as the first representative of this family named after the place. The members of the family were probably ministerials from the Counts of Altendorf-Leonsberg ; they are attested here until after 1330. After the middle of the 14th century, the Lords of Donnerstein (or Darstein) followed here. They had to sell parts of their property to the Count Palatinate and to the Warberger and Thierlingers. In 1454, however, Christoph Wartberger and Wilhelm Türlinger zum Thierlstein sold their quarter share in the Waffenbrunn headquarters back to the brothers Konrad and Stephan zum Darstein. 1488 Waffenbrunn is attested as Hofmark . The widow of Stephan the Donnersteiner is attested to as the sole owner of Waffenbrunn until 1493. Immediately afterwards the Hofmark must have passed into the possession of Gabriel von Parsberg; this is entered here in 1503 in the land table . Joachim von Nussberg (1530–1534) and Albrecht von Nussberg (until 1563) are known to have been the owners of the property towards the middle of the 16th century. By marrying Albrechts von Nussberg's heir, the property passed to Lorenz von Sparnberg in 1571. Hans Christoph Fuchs acquired half of the Darstein's share in the last quarter of the 16th century ; he sold it to Hans Georg von Marolting in 1615. At the same time, Georg Adam von Sparnberg seems to have succeeded in taking full possession of Darnstein Castle in addition to his main property, Waffenbrunn. But he had to leave Waffenbrunn as a Protestant . In 1627, Hans Heinrich Nothracht zu Wiesenfelden acquired the entire Sparnberg inheritance, but had to lead a lengthy process over Waffenbrunn with Hans Albrecht von Dandorf. During this time the Rittmeister de la Haye from Brussels , father-in-law of Hans Heinrich Nothracht, lived on Waffenbrunn. In 1638 the Hofmark was awarded to him by a contract. In 1641 the Augsburg patrician family Schätzler acquired the property, which was taken over by the Freinhuber family in 1669. In 1671 Waffenbrunn was bought by the Freinhuber family from Thürnitz to Irlbach and Haunkenzell. At the beginning of the 18th century, the von Paur family took over the ownership.

In the Hofmark Waffenbrunn several other country estates have risen over the centuries . B. Darstein, which passed to Gabriel von Parsberg in 1503. Also Pemfling is run as pertinence of Waffenbrunn in the tax book of the 1577th

In the 18th century, the von Paur Waffenbrunn family was also associated with the Hofmark Löwendorf . The von Paur family wanted to set up a first class patrimonial court in Waffenbrunn in 1819 . In 1820 the approval for the establishment of a second class patrimonial court was granted, but this was already withdrawn by the state, at that time Waffenbrunn is referred to as the allodial estate of the Lords of Paur. In 1919 the estate passed to the daughter Ludmilla von Paur, who married Gottfried Freiherr von Schacky auf Schönfeld in 1920. Since then it has belonged to the Barons von Schacky auf Schönfeld. The von Schacky family has again owned the Thierlstein castle complex since 1984.

Waffenbrunn Palace then and now

The residential tower built under the gun wells is likely to be the oldest part of the complex. Under the Darsteiners, the residential building in the middle of the complex and the chapel were built in the 15th century. As the engraving by Philipp Apian shows, there is also a curtain wall around this time. The castle was also protected by a moat to the north and a number of ponds in the south. During the Thirty Years' War the castle was looted and damaged in 1633. A second looting took place in 1641. The buildings were rebuilt by Maximilian Freinhuber, which was destroyed again by a major fire in 1677. It was not until the von Paur family that the final restoration, including the removal of the fortifications and the expansion of the castle in its current form, took place. The wing of the building with the gate south of the residential tower was also removed. In 1756 the chapel was rebuilt. In 1761 the house of the benefiziaten castle was built to the northeast of the same .

As the engraving by Michael Wening from 1721 shows (the palace was only poorly restored at the time), Waffenbrunn Palace is a multi-part building complex. The engraving shows a main building with a projecting central risalit and a tower standing sideways. A sundial is depicted on the central projection . The castle chapel with its onion dome can also be seen. A simple wall with an entrance portal and several farm buildings surrounds the palace area. Also noticeable is a dovecote, also covered with an onion dome.

The south-western part of Waffenbrunn Palace is now occupied by a horseshoe-shaped three-wing complex of the Ökonomiehof that was newly built in 1926. A partly walled open space is in front of the actual castle on the street side, the steep gable of the rectangular two-storey main building standing on a high base is striking. To the west of it and connected to it by an intermediate building rises the medieval , four-storey former residential tower with a crippled hipped roof . The buildings of the castle, which are kept in a uniform yellow, are structured by plaster strips. The castle chapel St. Martin from 1756 is attached to it, a single-nave, flat-roofed building with a retracted, semicircular closed choir . This is crowned by a roof turret with a lantern. The two-storey, baroque-style hipped roof building of the beneficiary's house and the castle administration is located on the wall of the castle park . To the north and west is an enclosed castle garden in the style of a landscape garden from the late 18th and 19th centuries with remains of the castle wall .