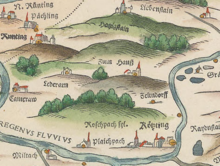 The lost castle house was located in the district of the same name in the Upper Palatinate town of Bad Kötzting in the Cham district of Bavaria (house no. 1). It lay on the southwestern edge of a south-facing spur foothills between the White Rain and the Dampfbach.

In the second half of the 12th century, a local nobility has come down to us that calls itself after Feßmannsdorf . In 1160, in a tradition of the Windberg monastery, a Fridericus de Vezvinisdorf is called and in 1184/85 Friederich et Mainhart de Vezwinesdorf are mentioned in a document from the monastery of Oberalteich . Vezmannsdorf then appears among the possessions of the monastery Rott and was in the Bailiwick Kötzting in Urbar of Viztumamtes Straubing entered.

The castle complex was probably only built in the 14th century. Under the census nobilium , a Dietricus Grauenuiser vom Haus (i.e. a Grafenwiesener from the nearby Grafenwiesen Castle ) is named. In 1373 a Fresmansdorfa Chuenrad appeared. The Rott ain haws inn monastery gives a Vesenstorffer the parish of Chosting, because he himself is up . 1417 a Chunrad der Mayr sat at Fasmansdorff called pey the Hawse . Obviously, the place name derives from the castle that used to belong to Feßmannsdorf (today part of Grafenwiesen ). In 1494, Zum Hawß, as it is called Veßmanßdorf , is still spoken.

Since 1500 are piston , which in this area at times many possessions and functions (eg. B. Castle Raindorf , Castle Hillstett , castle Kager , Castle Reichenberg ) were named as the owner of the house. In 1542 the house is referred to as the seat and court mark . In 1558 Christoph Pachmayr , a citizen of Kötzting, is the owner of the Hofmark. In 1603 Hans Pachmayr sold the estate to Hans Katzenberger , the caretaker of Lichteneck . On May 23, 1605, the abbot von Rott hands over the property as free property . In 1755 Johann Viertl came into the possession of the Hofmark. His widow, a remarried von Dengler , became the owner in 1766. In 1771 they sold the Hofmark to Karl Graf von Berchem .

In 1820 the Counts of Berchem were allowed to set up a second class patrimonial court . In 1833 the state acquired the land and took over jurisdiction over the local subjects . After that the buildings were demolished and replaced by today's buildings.

Castle house then and now

On the map of Philipp Apian from 1568 the house is shown with a high tower, two buildings and a circular wall with loopholes , whereby the question is whether this is depicted realistically. Already in the country table from the first half of the 17th century, the house is referred to as a collapsed castle valley, is referred to as being dressed for a court mark . The building, which collapsed in the 17th century, must have been rebuilt later, as an oil painting by Theodor Stifler from 1665 shows. This new building must have been built under the Katzenbergers .

Today there are remains of the castle in an agricultural property of house (No. 1), without anything of the castle being recognizable. The artificially created plateau on which the castle stood and which is now surrounded by farm buildings is still there.