The Sattelpeilnstein Castle (sometimes also called Beistoi , Paylstain or Peilstein ) is located in the district of the same name in the Upper Palatinate community of Traitsching in the Cham district of Bavaria (Schloßplatz 1). The castle was on the southern border of the area of ​​influence of the Diepoldinger against the Counts of Bogen and from the castle the trade route from Straubing to Cham could be controlled over a long distance. Why Peilnstein became the name Sattelpeilnstein is unclear, the name ( Satelpeilstain ) appears for the first time in 1459 in a Regensburg cathedral calculation , as an official name it is used once in 1503 and only again in 1787.

In the second half of the 12th century, the ministerials of the Margraves of Cham appear, who name themselves after Peilstein . In the Duke's Surbar of 1311, the catrum Peilstein is mentioned as a ducal estate of the Wittelsbach family . The last of this family could have been Eiban von Peilstein in 1339 . A Loitz Dorfer is for Burghut for castri Peylstain paid from the Cham customs revenues. According to the fief book of 1625, Sattelpeilnstein and his pertinence Tragenschwand are considered imperial fiefs. In 1348, Ludwig the Brandenburger prescribes Wolfhart Zenger some sums of money for his services at the vesten Peylstain . In 1352 the castle and the Cham court were pledged by the Lower Bavarian dukes to the Wittelsbachers from the Palatinate. When Duke Albrecht redeemed part of the Margraviate of Cham from the Count Palatine , Peylstein das haws was also named among these goods , which the Palatinate redeemed from Friedrich and Engelhard the Zenger . The festival then becomes the seat of the Peilstein-Kötzting nursing home . The first carer was Friedrich Zenger in 1371 . According to a service reverse from 1469, however, the caretaker had to move to Kötzting and have Peilstein provided by a reliable servant. When the Straubing inheritance was divided in 1429, Sattelpeilnstein fell to the Duchy of Bavaria-Munich .

At the end of the 15th century it was reported about Peilstein that it was so little valid that a nurse could not get along with it, that's why the castle is so pawfellig . In 1503 , Duke Albrecht IV decided to transfer the castle and all its accessories to Falkenstein's keeper Heinrich Goetz zu Bistriz as a personal asset with the condition that the building be restored to good condition, which he did not do. In 1571 Duke Albrecht V transferred the run-down castle with the court brands Peilnstein and Tragenschwand as a continuous fief to one of Duke Ernst's illegitimate sons , namely Justinian ; this is then also called Justinian von Peilnstein . Hofmark Miltach had also been transferred to him. In 1573 he was also granted noble freedom. With the support of the Duke, he was able to rebuild the castle. He finally gave up the dilapidated castle and had the castle that still exists below the castle built in 1571-80, with the castle serving as a quarry. In 1571 the complex, which was demolished for the construction of the castle, is only called a collapsed Purckhstall , of which demolition measures are still documented for the 19th century. 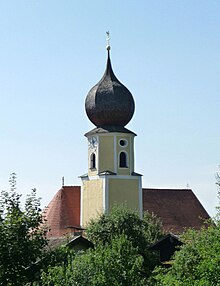 After the death of the descendants of Justinian, called his son Hans Georg , Schloss Sattelpeilnstein falls back to the Duke, who now gives Oswald Schuß , President of the Court Chamber and keeper of Rottenburg, Satteilpeilstein and Tragenschwand. Both court brands remain with this family until 1767, when Ernst Leopold Xaver von Schuß died . The von Schuss family brought the estate to great honors and fortunes, despite the hard times of the Thirty Years' War . It is thanks to them that the parish church was rebuilt in the first half of the 18th century. In 1778 the Pelkofers , who alternately had many possessions in the area (e.g. Raindorf Castle , Chameregg , Malling Castle ), are handed down as owners. In 1780 Josef Maria von Weichs bought the estate on Falkenfels . In between, the Knörringen and the Sandizell are also mentioned here. In 1790, Johann Georg von Silberbauer came into possession of both court brands. The jurisdiction will soon pass to the regional court.

In 1830 the property is auctioned on Gantweg ; the church administration Sattelpeilnstein acquired the property and sold many of it to the village population. The rest of the ruined castle property was bought by Georg Stangl von Loifling in 1832, who leased the brewery and had stables and other buildings demolished. In 1842 Otto Schauer from Passau acquired the castle estate. Thanks to him, the property soon regained its old reputation. The castle and the former brewery are still privately owned today.

Sattelpeilnstein Castle then and now

From the castle Sattelpeilnstein, which was dismantled in 1571, and the associated castle stable , small remains of the wall with granite humpback cubes from the second half of the 12th century and an inscription from 1842 are still preserved. Access to this small main and curved upstream to the south bailey revealed a mighty castle keep that was blown until the 1,832th Only parts of the ring wall of the lower castle have been preserved as a lining wall. A well or cistern shaft that was still visible in the 19th century has also disappeared . The remains of the facility are under monument protection .

The Sattelpeilnstein Castle was based on the engraving by Michael Wening from 1721 as a two-story, cubic structure with four corner towers covered with tent roofs. In front of the castle was a covered entrance area. The castle is surrounded by farm buildings that form a rectangular forecourt, which is partially closed by pieces of wall.

Today the castle is still a two-storey flat gable roof building with a mezzanine floor and four corner towers of different heights (today partly with a crenellated crown ). The building dates mainly from 1571 to 1580. After a fire in 1862, the castle was restored in a simplified manner. The ensemble includes a granite hour column from the first half of the 19th century, which indicates the distances in walking times.