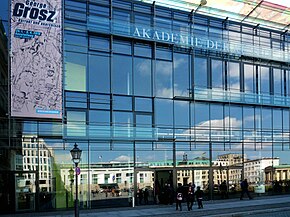 Academy of Arts at Pariser Platz  4 in Berlin-Mitte

The Akademie der Künste ( AdK for short ) is an institution for the promotion of art based in Berlin , which was founded in 1993 by the union of the East and West Academy. It is the traditional successor to the Prussian Academy of the Arts , whose members included Johann Gottfried Schadow , Carl Friedrich Zelter , Christian Daniel Rauch , Karl Friedrich Schinkel , Adolph von Menzel , Heinrich Zille and Max Liebermann .

Friedrich I , founder of the Academy of Arts,
painting by Antoine Pesne

The Berlin Academy of the Arts goes back to the July 11, 1696 by Elector Friedrich III. Academy founded by Brandenburg , who later became King of Prussia, Frederick I. It refers to the tradition of this learned society , which changed the name and also the location several times:

Max Liebermann opened an exhibition in Palais Arnim in 1922

The Akademie der Künste is an exhibition and event location, a meeting place for artists and those interested in art, as well as a place for public debates on art and cultural policy. Your archive is one of the most important interdisciplinary archives on 20th century art. It has exclusively non-profit purposes and according to the law establishing the Academy of the Arts (AdKG) the following tasks:

Since January 1, 2004, the Academy of the Arts has been a public corporation supported by the Federal Republic of Germany . It has a legal status with the right to self-government. As the grantor, the federal government has a majority of the votes in the Administrative Advisory Board.

The law required to establish the academy was promulgated on May 9, 2005 and came into force on January 1, 2006. The states of Berlin and Brandenburg have been given a say in this regard as the law establishing the Academy of the Arts will only come into force after the existing academy, which is supported by the two federal states, has been dissolved. In addition, both countries each have a representative on the administrative advisory board.

The academy is divided into the following sections, each with its own director (as of December 2019):

The academy has - legally regulated - a maximum of 500 members, in December 2019 there were 421. These are appointed by the sections of the academy, elected by the general assembly by secret ballot and appointed by the president. Honorary members can also be proposed by the Senate of the Academy of the Arts. All members belong to the general assembly of the Akademie der Künste, but the honorary members only have an advisory capacity.

Johann Gottfried Schadow , director of the academy from 1816 to 1850

Foyer and stairs in the Academy of Arts

The headquarters of the academy is in the traditional location at Pariser Platz 4 in the Mitte district of the district of the same name in a new building by the architect Günter Behnisch opened in 2005 , into which the Ernst von Ihnes exhibition building from 1907 is integrated.

Former basement rooms of the Prussian Academy of the Arts , which also include the basement rooms of the neighboring Hotel Adlon, have been preserved on Pariser Platz . In 1957, students from the master studios of the Academy of Arts of the GDR designed these basement rooms as a party basement for the first Academy Carnival . The walls, blackened by the events of the war and the storage of coal , were painted in simple shapes similar to stick figures . Other brightly executed pictures such as red champagne glasses, wild hunting scenes or erotic nudes ultimately delighted the visitors. The following artists who later became famous were immortalized on the walls: Manfred Böttcher , Gustav Seitz , Heinrich Ehmsen , Werner Stötzer , Harald Metzkes , Ernst Schroeder or Horst Zickelbein . A second carnival event also took place in this art cellar in 1958 . After their rediscovery, the basement rooms with their pictures were preserved on the initiative of Matthias Flügge and made publicly accessible at Art Week 2018.

The former headquarters of the West Berlin Academy of the Arts on Hanseatenweg in the Hansaviertel , built by Werner Düttmann from 1958 to 1960 , will continue to be used for events and exhibitions as well as for administrative purposes.

The first location was the royal stables at Unter den Linden 3 until 1901 , a building in place of today's State Library at Unter den Linden . The academy later moved into a multi-purpose building on the property at Unter den Linden 8, and in 1902 the Palais Arnim by Eduard Knoblauch , which Ihne had converted for the Akademie der Künste by 1907 and added an exhibition building. During the construction period, she resided in Potsdamer Strasse for five years . From 1938 until its destruction in 1945, the academy was located in the Kronprinzenpalais .

The headquarters of the German Academy of the Arts, later the Academy of the Arts of the GDR, was until 1977 in the house for medical training of the Charité, also built by Ihne in 1906, at Robert-Koch-Platz 7 in Friedrich-Wilhelm-Stadt in Berlin-Mitte , then in the same district in the Langenbeck-Virchow-Haus . The location was given up in the early 1990s. The Ihnes extension on Pariser Platz, which was barely damaged in the Second World War, was used by the Academy as a studio, workshop and depot building until 1990.

The extensive archive of the Akademie der Künste , which also includes a large art collection, is now the most important interdisciplinary archive on art and culture in the German-speaking area since 1900. According to the membership structure of the academy, it encompasses all arts. Its main task is to acquire archives of artistic and cultural historical importance, to record them and to make them available to science and the interested public. In October 2012, the Peter Zadek archive, comprising around 35 meters of shelf space, was made accessible to the public. On November 3, 2012, the Academy opened the Christoph Schlingensief Archive, which the artist had already handed over during his lifetime, with over 40 meters of shelf material for his cross-genre artistic activities ( audiovisual media , posters, correspondence, programs, photos, production documents for some of his films and productions).

The art collection includes around 70,000 works on paper as well as paintings, sculptures, artistic objects and over 40,000 posters. She also looks after works of applied fine arts and objects of cultural history that come from the bequests of other artistic disciplines, such as theater costumes and stage models. Her significant treasures include the large inventory of drawings by Johann Gottfried Schadow , Daniel Chodowiecki's character sequence from his journey from Berlin to Gdansk , the Amalfi sketchbook and landscape oil sketches by Carl Blechen and, from the 20th century, the entire estate of John Heartfield and an extensive partial estate by George Grosz with drawings, graphics and collages . Her more recent holdings include the Guillermo Deisler Mail Art collection , extensive vintage print series by Michael Ruetz , the entire graphic oeuvre of Alfonso Hüppi and large-format paintings by Thomas Huber and Carl Frederik Reuterswärd. From 1786 to 1886 there was a drawing school for craftsmen at the Berlin Academy of the Arts .

The academy is responsible for numerous publications; the current offer can be found on the institution's website. Since 1956 z. B .:

Notes on the time (since 1956):
With contributions by Hans Egon Holthusen : Book 1 ( Memorial to the Unknown Political Prisoner ), Kurt Ihlenfeld : Book 2 ( Paul Gerhardt Celebration of the Academy of the Arts ), Adolf Arndt : Book 9 ( on the opening of the new Philharmonie ), Theodor W. Adorno : Booklet 12 ( About some relations between music and painting - Art and the Arts ), Will Grohmann : Booklet 13 ( Wassily Kandinsky on his 100th birthday ), Günter Kunert : Booklet 18 ( Heinrich von Kleist - A model ), Walter Jens : Booklet 20 ( Never get over the old times ).

The Academy awards a variety of awards and grants :