The Zwenkau opencast mine after its closure. Bösdorf was in the left center of the picture; up is Zwenkau .

Bösdorf was a village south of Leipzig , which was devastated in 1982 because of the lignite mining and subsequently dredged over by the Zwenkau opencast mine . 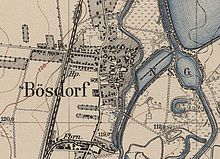 Bösdorf 1940, at the top right the Elster reservoir

Bösdorf was about twelve kilometers south-southwest from the center of Leipzig. It was roughly equidistant, three kilometers from Knauthain in the north, Knautnaundorf in the west and Eythra in the south. The Weisse Elster and the Elstermühlgraben flowed east of the village . Today the former location is on the northern edge of Lake Zwenkau .

Bösdorf was first mentioned in writing in 1277 as Boisdorf. Since the end of the Middle Ages, the manor ruled the Eytrha estate.

Administratively, Bösdorf belonged to the Hochstift-Merseburg office of Lützen until 1815 , which had been under Electoral Saxon sovereignty since 1561 and belonged to the secondary school principality of Saxony-Merseburg between 1656/57 and 1738 . As a result of the resolutions of the Congress of Vienna , the western part of the Lützen district became part of Prussia in 1815. Bösdorf, which remained with the eastern part of Lützen in the Kingdom of Saxony , was assigned to the Leipzig district office in 1815. In 1856 it came to the court office in Zwenkau and in 1875 to the administrative authority in Leipzig . With the establishment of the districts of the GDR in 1952, it belonged to the Leipzig-Land district in the Leipzig district .

To the north-east of Bösdorf, a reservoir was created between 1933 and 1935, which was fed by the Elstermühlgraben, which carried the main part of the Elsterwasser until the 1970s. The official name of the lake was Elsterstausee Bösdorf . Today it is only called Elsterstausee and has now dried up .

The largest industrial company in Bösdorf was the steel and chilled cast iron works, which had moved from Leipzig to Bösdorf in 1917 under the name Max Heller Successor (MHN). The first electric arc furnace built in the GDR was used here for the production of cast steel.

In 1970, Bösdorf and the neighboring Eythra were declared a mining reserve in the run-up to the Zwenkau opencast mine, which was spreading towards the villages . In preparation for the mining activity, the Elster and the railway line were moved to the west. On March 27, 1974, Bösdorf was incorporated into Eythra. Because of the expansion of the Zwenkau open-cast lignite mine, the residents were resettled from 1980 to 1982 and then demolished and then demolished. The steel bell of the church was installed in 1981 in the Andreas chapel in neighboring Knautnaundorf . The Reinholdshain parish was able to acquire the organ of the Bösdorf church in 1983 and have it installed in its village church. This organ was built in 1866 by the well-known organ builder Urban Kreuzbach for the Bösdorf Church.

Eythra was also devastated from 1982 onwards. In 1988 the devastated areas of both places were incorporated into Knautnaundorf, with which the Bösdorf district came to Leipzig in 1999.