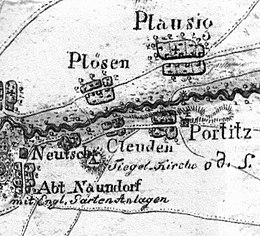 Thekla is a northeastern part of Leipzig . It is bounded to the south and southeast by two railway lines, to the east and northeast by the A 14 motorway . The Parthe flows through the district. Thekla was created in 1889 by amalgamating the villages of Plösen, Cleuden and Neutzsch and the church of Hohen Thekla.

Plösen, Cleuden and Neutzsch belonged to the electoral and royal Saxon district offices of Leipzig until 1856 . In 1856 they came to the Taucha court office and in 1875 to the Leipzig district administration .

Plösen came about through the settlement of farmers on the right bank of the Parthe. A first documentary mention as Blegyn dates from 1335. In the 14th century Plösen was under the rule of the manor owners von Plaußig and the knight Johannes Porczik. In 1506 Heinrich von Plaussig sold his share to the Preusser family , in 1530 Georg Schittel, professor of medicine at the University of Leipzig , was enfeoffed with Hans von Plaussig's share. After further changes of ownership, Plösen was sold to the City Council of Leipzig in 1734. During the Thirty Years War , Swedish troops burned three farms in 1637; Even during the Battle of Nations in 1813, the population of the place suffered from looting and billeting.

The village of Cleuden, east of Plösen, was founded as a lane village on the left of the Parthe. It was the smallest but most important of the Parthian villages. Cleuden was first mentioned as Cludene in 1325 , when five of the town's estates passed into the possession of the Thomaskloster . In 1543, in the course of secularization , the goods became the property of the City Council of Leipzig.

Neutzsch, which was in the southwest of Plösen, was founded as a dead end village on the left bank of the Parthe . The first documentary mention as Nysch comes from 1335. The city council of Leipzig acquired all goods of the village until 1515. In 1698 four of the estates were completely destroyed in a fire. Neutzsch developed most strongly from the middle of the 18th century due to the development of today's Tauchaer Straße .

History since the merger

On March 9, 1889, the community of Thekla, with 1,390 inhabitants, was created through the amalgamation of Plösen, Cleuden and Neutzsch. The place name was based on the name of the church. In 1904, the town received a full-time local council, who from 1906 worked in the newly built town hall on Tauchaer Straße. Thekla has had its own freight yard since the beginning of the 20th century. Since 1915 the community has been connected to the Leipzig - Eilenburg railway line through its own passenger stop. On March 1, 1930 Thekla was incorporated into the city of Leipzig with 2,300 inhabitants. In 1931 Thekla was connected to the Leipzig tram network . During the 1930s, the construction of settlement houses was promoted. In 1933/34 a gravel pit was dug on Theklaer Flur for the construction of the motorway. It was redesigned in 1961/72 as a 3.2 hectare Northeast natural swimming pool ("Bagger"). Not far from the lake, a new building area with over 1,600 residential units was built in 1976.

From 1943, the subcamp Leipzig-Thekla of the Buchenwald concentration camp was located in Thekla , in which forced laborers of the Erla company were held. The camp became notorious as a result of the Abtnaundorf massacre of prisoners and the prisoners' death march after the camp was evacuated in April 1945.

The church Hohen Thekla was built between 900 and 1100 as a Romanesque hall church. It was built on a hill between Neutzsch and Cleuden, which was formerly called Hohentichel, Hohentiegel or Hohentechla (the Hohentichelnstrasse, which leads from Paunsdorf to Heiterblick , is still reminiscent of this today ). The church - together with the Beucha mountain church and the Panitzsch church because of the high altitude of all three - is commonly referred to as one of the "three high priests" in the Leipzig area.

The up to 2 m thick walls of the church consist of large field stones. After the Thirty Years' War, in which the building fabric suffered considerable damage, the name St. Thekla Church came up due to a misunderstanding. This has been documented in writing since 1663 and has lasted for a long time. During the Battle of Nations, the Swedish Crown Prince Bernadotte used the church as an observation site. Three French cannonballs built into the church tower's stucco commemorate the events of 1813. In 1959 the church burned down to the surrounding walls as a result of arson. The entire facility, the winged altar from 1510, the pulpit from 1680, the old baptismal font, the organ and the bells were destroyed. On October 7, 1962, the newly built church by the architect and building officer Fritz Ziel and the interior designer Lilo Häring was consecrated. The reconstruction under the direction of Fritz Ziel succeeded using material from a devastated church.

Probably the most prominent wedding in Hohen Thekla took place in 1840, when the politician Robert Blum married Eugenie Günther .

The Nordost natural swimming pool, popularly known as the excavator , was created from a former gravel pit.

The tram line 9 has a terminal in Thekla, the lines 3 and 8 affect the surroundings of the road Torgauer. The two S-Bahn stops for line 4, Thekla and Heiterblick, are on the edge of the district . The north can be reached from the A 14 via the Leipzig-Messegelände exit , the south via the Leipzig-Nordost exit .