The Roman Catholic Diocese of Margarita ( lat. : Dioecesis Margaritensis ) is in Venezuela situated Roman Catholic diocese , based in La Asunción on the Isla Margarita . It includes the state of Nueva Esparta .

Pope Paul VI founded the diocese with the Apostolic Constitution Verba Christi on July 18, 1969 from cession of territory from the Diocese of Cumaná and was subordinated to the Archdiocese of Ciudad Bolívar as a suffragan diocese.

With the elevation of the Diocese of Cumaná to the Metropolitan Archbishopric on May 16, 1992, it became part of the new ecclesiastical province. 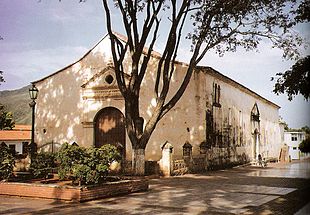