Blumenstein is a municipality in the Thun administrative district in the canton of Bern in Switzerland .

The municipality is the westernmost municipality in the administrative district of Thun. It is located on the north side of the Stockhorn chain in the uppermost part of the Gürbetal and in the Stockental . The Gürbe flows through its northern edge . The community consists of two parts: on the one hand, Inner-Blumenstein with the village of Blumenstein and the hamlets of Eschli , Gassen , Rüdeli and Wäsemli ; on the other hand from the hamlets of Bodenzingen , Lochmannsbühl and Reckenbühl (together called Ausser-Blumenstein) and the formerly independent municipality of Tannenbühl . There are also numerous groups of houses and individual farmsteads. Half of the municipal area of ​​1552 hectares, 49.6%, is used for agriculture. Another 38.0% are forest and wood and 8.5% are unproductive areas (like rocks) - especially in the mountain area towards the Stockhorn chain. And only 3.9% of the community area is built over. The community lies on the edge of the Gantrisch Regional Nature Park .

The population speaks a high Alemannic dialect in everyday life , which is one of the dialects of Bern German . At the last census in 2000, 97.15% said German, 1.76% Albanian and 0.34% French were the main languages.

In earlier times all residents were members of the Evangelical Reformed Church. This has changed due to immigration from other regions of Switzerland and abroad as well as church resignations. On December 31, 2007, the religions were made up as follows: 82% Reformed, 6% Catholic, 10% non-denominational and 2% other (Muslims and some gave no information about their creed). The Muslims are almost exclusively of Albanian origin.

The proportion of foreign immigration is low. As of December 31, 2007: residents 1176 of which 39 residents are foreigners. Of the 1,139 Swiss nationals, ten had more than one nationality. The few immigrants come from Serbia-Montenegro, Macedonia (in both cases mostly Albanians), Germany, Italy, Spain, Sri Lanka and the Netherlands.

Blumenstein Bad : A group of 7 bathers talk to the bathing host. On the right a servant brings a basket with bottles of wine. Watercolor by Emanuel Jenner (1808)

The village was dominated by agriculture until well into the 20th century. In addition, the spa business in the climatic health resort of Blumenstein-Bad played an important role. Grain and potato cultivation dominated agriculture until the 19th century, before cattle farming began on a large scale. Today (as of 2000) there are still 87 employees working in the 32 farms. Industry and small businesses offer 153 people a job, while 119 people find a livelihood in the 27 service companies. Numerous people from Blumenstein are commuters these days - especially to the city of Thun. 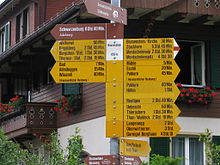 In earlier times, Blumenstein-Bad in particular attracted strangers. Today it is mainly hikers and cyclists who come to Blumenstein. In 2008 the municipality refused to join the Gantrisch Regional Nature Park.

Blumenstein is not on any railway line, but is well connected to the public transport network by bus. Lines 3, 50 and 51 of the STI run to and from Thun . Line 53 to and from Seftigen train station during the day.

Blumenstein is on the road from Wimmis to Seftigen, but also has good road connections to Thun. The closest motorway connections are Thun-Süd and Thun-Nord on the A6 .

The community was settled relatively late. The rule Bluomenstein sold Peter von Raron on May 18, 1348 to the city of Bern . The lower jurisdiction had different families. First the gentlemen von Blumenstein , lastly those of Wattenwyl . A member of the latter family sold his rulership rights to Bern in 1642. Initially, the place belonged to the Seftigen district court , from 1658 to 1798 to the Thun office . From 1798 to 1803, Blumenstein was part of the Helvetian district of Oberseftigen . Since then, the community has belonged to the district of Thun . The hamlet of Tannenbühl was an independent municipality until it was incorporated in 1859 (1850: 385 inhabitants).

The group of buildings on the Fallbach with the church (formerly St. Nicholas), the rectory, the cow's house and the Pfrundscheune are worth seeing. This assembly is one of the structures of national importance. Various old farmhouses are also worth seeing because of their own style.

Political communities in the administrative district of Thun