This article refers to the municipality of Wattenwil in the Gürbetal; for further meanings of the same terms, see Wattenwil (definition of terms )

Wattenwil is a municipality in the Thun administrative district in the canton of Bern in Switzerland .

Wattenwil lies at 603  m above sea level. M. , 9 km west of the city of Thun (linear distance). The village extends on the southernmost edge of the wide Gürbetal plane , west of the Gürbe , at the eastern foot of the Gurnigelberg .

The area of ​​the 14.5 km² large municipal area comprises a section of the pre-alpine hill country west of the Aare valley . The eastern part of the municipality is located in the floodplain of the Gürbe, whose valley in this area is around 1 km wide. The entire valley floor belongs to Wattenwil, the eastern border runs at the foot of the Riedhubel . The valley floor rises gradually towards the south. The southern boundary is formed by the alluvial cone that the Gürbe has accumulated over time at the foot of the Gantrisch area at its exit from the Wildbachtal into the Stockental.

To the west, the municipality extends over the slope from Rain to the Würzenegg (up to 982  m above sea level ) and to the slope of the Gurnigel , on which at 1320  m above sea level. M. the highest point of Wattenwil is reached. This slope consists of extensive forests ( Gurnigelwald , Lieneggwald , Ober Wald , Unter Wald ) and is subdivided by several left side streams of the Gürbe ( Mettlibach , Lienegggraben , Öligraben ). The southern border is in turn in the steep Wildbach valley of the Gürbe, which has dug an erosion valley into the flysch rock. In 1997, 7% of the municipal area was accounted for by settlements, 49% for forests and woodlands and 42% for agriculture; a little less than 2% was unproductive land.

The municipality of Wattenwil is made up of three village districts: 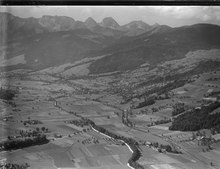 The municipality of Wattenwil was settled very early, which could be proven by some finds from the Bronze Age and the Roman Age . The first written mention of the place took place in 1226 under the name Watenwile . Later, the names Wattenwile (1262), Watwile (1268), Watinwile (1276) and Watenwil (1295) appeared. The place name goes back to the Old High German personal name Wato and therefore means at the Wato homestead .

Until the middle of the 20th century, Wattenwil was predominantly an agricultural village. The water power of the village stream was previously used to operate several mills and sawmills. Even today, arable farming in the valleys, as well as dairy farming , cattle breeding and forestry play an important role in the income structure of the population. Numerous other jobs are available in local small businesses and in the service sector. Wood processing companies (sawmills, carpenters), the building trade, horticulture, the electrical industry, a car paint shop and mechanical workshops are represented in Wattenwil today. The community has a secondary school and was the location of a district hospital since 1887, which today serves as a retirement and nursing home. In the last few decades the village has developed into a residential community. Many workers are therefore commuters who work mainly in the Thun area.

The community is located off the major thoroughfares on a connecting road from Bern through the Gürbetal and Stockental to Wimmis . The closest connection to the A6 motorway (Bern-Thun) is around 9 km from the town center. The village is connected to the public transport network by the bus lines of the STI transport company , which operate the routes from Thun to Blumenstein, from Seftigen to Blumenstein and from Wattenwil to Riggisberg .

Wattenwil owned a chapel early on, but until 1659 it belonged to the Thurnen parish. When the Anabaptist movement spread in the village, Bern raised the village to an independent parish. The new church was built in 1683 according to plans by Abraham Dünz and equipped with the baptismal font and the bells from the previous building. A former mansion, which was converted to Baroque style in 1702 and rebuilt again in 1785, serves as the rectory.

Numerous characteristic Bernese-style houses from the 17th to 19th centuries have been preserved in the village. The village fountain consists of a granite monolith. Above the village there is a richly painted granary from 1802 in the Grundmoos.

Political communities in the administrative district of Thun