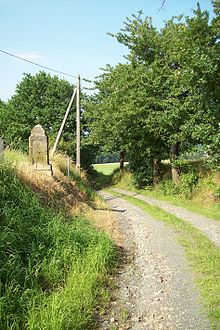 The old and new Dresden-Teplitzer Poststraße belong to the Ore Mountains passes and form part of the old system of paths known as the Kulmer Steig , which led from the Dresden Elbe Valley over the Eastern Ore Mountains to Bohemia . Today, the old Dresden-Teplitzer Poststrasse in its Saxon section is considered to be the most complete historical traffic connection with preserved post mile columns .

The Alte Dresden-Teplitzer Poststraße ran from the Strehlen town center of Altstrehlen further out of town along the Dohnaer Straße . Thus, its course in the Dresden city area is identical over large sections with today's state road 172 (former federal road 172 ). Between Lockwitz and Kleinluga , the S 172 leaves the old Poststrasse route, which bridges the Maltengraben as the Alte Landstrasse and then continues as Lockwitzer Strasse over the Lugberg to Dohna . The route led from here via Köttewitz , Niederseidewitz , Nentmannsdorf , Göppersdorf , Börnersdorf , Breitenau and Fürstenwalde to the Bohemian border. In Bohemia, it first led on over the ridge plateau near Ebersdorf (Habartice) to the Geiersberger Pass , and then downhill past the Geiersburg (Kyšperk) past the Mariaschein (Bohosudov) monastery and Soborten ( Sobědruhy ) to Teplice (Teplice) .

The Neue Dresden-Teplitzer Poststrasse led from Dresden directly to Pirna and from here via Zehista , Cotta , Berggießhübel , Gottleuba and Hellendorf to today's Bahratal border crossing . Here the road reached over Peterswald (Petrovice) at 680 m above sea level. NN located Nollendorfer pass , from which the mountain descent over Tellnitz (Telnice) and Kulm ( chlumec done) to Teplitz (Teplice).

Country roads like these two post roads emerged as connecting roads between the countries in the Middle Ages . They very often use connections that were already used in the early days of trade by traders and travelers on foot, on horseback or in carriages . The most scenic routes were selected, especially when it came to crossing rivers and mountains .

At first the salt route led as a trade route across the Ore Mountains from Prague to Halle (Saale) . It went through Teplitz and on the old Poststrasse, which was based on the Kulmer Steig , over the Geiersberg, past the “Goldammerkreuz” to Ebersdorf and from there to the “Black Cross” (both erected before 1785), to Müglitz and on to Saxony .

The result was a road system which, depending on the sub-goal, has different branches. Apart from the aforementioned post-roads are in the middle and Osterzgebirgischen nor the Müglitztalstraße portion (extending in the valley of Müglitz of Dohna about glassworks , Dittersdorf , Baerenstein , Lauenstein to Geising ) and the comb (between the Altenberg , Neuhermsdorf , Hermsdorf / Erzgeb. , Reichenau , Hartmannsdorf , Frauenstein , Rechenberg-Bienenmühle and Holzhau ) should be mentioned.

The roads were expanded further in the period that followed. From 1803 the connection from Teplitz to Prague began, and from 1810 the new Dresden-Teplitz Poststrasse was completely expanded. With industrialization , a significant change in the meaning of the two postal routes began in the mid-19th century. On the one hand, traffic shifted from the high roads to the newly built valley roads. The previously insignificant mountain crossing at Zinnwald was upgraded through the construction of the Müglitztalstrasse (from 1846) and the expansion of the Dresden - Dippoldiswalde - Schmiedeberg - Altenberg link (from 1842), while the neighboring Alte Dresden-Teplitzer Poststrasse over the pass at the Geiersburg (Kyšperk) became deserted and the border crossing near Fürstenwalde was closed in 1860.

The efforts to promote the postal and transport system, which were pushed by the Saxon elector Augustus the Strong at the beginning of the 18th century, required the surveying and mapping of the road system in Saxony. Adam Friedrich Zürner (1679–1742), who was later appointed Land and Border Commissioner for the Electoral Saxony region, was entrusted with this work from 1712 . As a result of his land surveying over several years, the elector ordered all important roads and postal connections to be marked by means of stone posts in 1721 . The distance columns set up in front of the city gates and on the marketplaces as well as the whole and half milestones set up on the roadside indicated the distances to the nearest important places on the postal route. The quarter milestones also marked the course of the road.

“Zur Post” inn in Zehista , the first post office between 1693 and 1827 on the way from Dresden to Prague

The Neue Dresden-Teplitzer Poststrasse was probably already measured by Zürner in 1722, three years before the Alte Dresden-Teplitzer Poststrasse. In a comparison of the two roads, this speaks for the greater importance of the path leading to Bohemia via Peterswald (Petrovice) and the Nollendorfer Pass . As early as 1723, the connection was marked using full and half mile columns and quarter milestones. In Berggiesshuebel and Bad Gottleuba post mile columns were erected. These two pillars are the only remaining landmarks from Zürner's time today. All other columns and stones probably fell victim to the expansion of the road, which began in 1810. The royal Saxon milestones near Dohma and Cotta that are still preserved along the road refer to the new mile length introduced in 1840 . The border column on the round part in Bahratal is a specialty. Although it still shows the distance information in league hours as in Zürner's time , the year 1820 is carved in. The column is demonstrably set much earlier, because it is on a mile sheet recorded in 1784 already noted as "border pillar".

Zürner measured the Alte Dresden-Teplitzer Poststrasse in 1725. Four years later, the erection of the pillars and milestones between Dresden and the Saxon-Bohemian border began. By 1732, 19 such markings were set along the road. Starting today and including the distance column in Dohna up to the state border, all 14 stones can be found again without any gaps. This makes the Old Dresden-Teplitzer Poststrasse in its Saxon section the most complete historical traffic connection with post mile columns and milestones. Your path markings and the following six sections of originally preserved path sections are now under monument protection :

While the loss of the distance columns and milestones that were once between Dresden and Dohna is mainly due to the urban growth in the upper Elbe valley , the losses of the markings that were formerly still between Dohna and the border are more likely to be related to acts of war and / or agricultural and forestry measures traced back.

Three non-existent quarter milestones at Borna-Gersdorf (location on the road from Laurich to Herbergen), Göppersdorf-Wingendorf (location on the Feldweg motorway bridge) and Fürstenwalde (location at the junction to the Black Cross ) including the explanatory boards next to all the Saxon post mile columns from Dohna to Fürstenwalde were prepared or set up as a remaining service by DEGES according to the planning approval decision for the federal motorway 17 until June 11, 2012 .