The first chief of the regiment Hans Joachim von Zieten in the officer's uniform H 2 approx. 1775. After an engraving by Chodowiecki .

The Hussar Regiment "von Zieten" , called Zieten Hussars , was a hussar regiment of the Prussian Army . At the beginning of the First World War it was subordinate to the 6th Division in Brandenburg . It followed the tradition of the old Prussian body hussar regiment of General von Zieten (H 2).

On September 30, 1730, the association was established by the soldier king Friedrich Wilhelm I as the Berlin Hussar Corps . In 1736 the unit was renamed Leib-Korps-Hussaren and Leib- Husaren - Regiment (H 2). After the double battle of Jena and Auerstedt , the regiment at Corps Blücher was destroyed and was considered extinct, although 6 squadrons were able to flee to East Prussia . As part of the reforms within the Prussian army, the Hussar Regiment No. 3 was re-established and took part in the coalition wars. Only in 1861, after long efforts, was the successor tradition of the Old Prussian Hussar Regiment H 2 recognized.

The tradition continued in the Reichswehr with the 2nd Squadron of the 3rd (Prussian) Cavalry Regiment in Rathenow. After joining the Wehrmacht , the tradition was carried on into the 1940s, when they recalled the equestrian spirit of Zieten and his hussars and appeared in the uniforms of the hussars on appropriate holidays or memorial days. After the regiment was dissolved, the city of Rathenow had a memorial for the Zieten Hussars made by the sculptor Wilhelm Otto .

The names of the regiment, from foundation to dissolution

The chiefs of the regiment 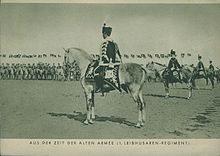