The article contains a detailed description of the Colombian national soccer team for women at world championships . Colombia first qualified for the women's World Cup in 2011 and took part for the second time in 2015. In the all-time table, Colombia is in 20th place. Before the 2015 World Cup, Colombia was the only World Cup participant not yet able to score a goal, but had conceded the fewest goals. Both changed when I took part again.

The national team at world championships

World Cup 1991 in the People's Republic of China

The Colombians did not take part in the Sudamericano Femenino 1991 , which served as qualification for the first women's World Cup. As a representative of South America, only Brazil took part in the World Cup.

The Colombians also did not take part in the Sudamericano Femenino 1995 , which served as qualification for the second women's World Cup. This meant that Colombia was unable to take part in the first women's soccer tournament at the 1996 Olympic Games , as only the eight best teams from the World Cup could qualify for it.

All 10 CONMEBOL members, including Colombia, had registered for the third world championship and the South American champions, who are again serving as qualifiers . The championship was therefore played in two groups in Argentina . Colombia met defending champions Brazil , Peru , Chile and Venezuela . On March 2, 1998, the Colombians played their first international match in Mar del Plata and won 4-1 against Venezuela. In the second game against Brazil they lost 1:12. After a 5: 1 against Chile, a 1: 2 against Peru followed. Colombia was eliminated in third place in the preliminary round and, in addition to participating in the World Cup, had again missed participation in the women's soccer tournament at the 2000 Olympic Games .

The 2003 World Cup should actually take place again in the People's Republic of China . Because of the SARS epidemic, the tournament was moved to the USA at short notice. This was the second time that the World Cup took place in the USA. In the qualification , which was played again as Sudamericano Femenino in 2003 , Colombia first had to face Ecuador and Venezuela. After an 8-0 win against Venezuela, a 1-1 draw against Ecuador due to the number of goals scored was enough to reach the finals. Brazil, which only had to start in the round of the last four, could not be beaten by any team. Colombia also lost to Argentina , which was the first to qualify for the World Cup. Only against Peru managed a 1-0 victory. But against Brazil there was the highest international defeat with the 0:12. In addition, participation in the women's soccer tournament at the 2004 Olympic Games was missed.

World Cup 2007 in the People's Republic of China

Four years later the World Cup took place in the People's Republic of China for the second time . In the Sudamericano Femenino 2006 , which again served as a qualification , the 10 CONMEBOL members initially played four teams in two groups of five for the final round. Colombia initially met Argentina, Uruguay, Ecuador and Chile. Colombia won their first game 1-0 against runners-up Uruguay , but then lost 3-1 to Chile and only scored 2-2 against Ecuador. Because of a 6-0 defeat against Argentina in the last game, the second group place was missed. Instead, Colombia dropped out as fourth in the group. Argentina then surprisingly beat Brazil in the finals and became South American women's champions for the first time. Both drove back to the World Cup, where Argentina suffered their first double-digit defeat at a women's World Cup against defending champions Germany . 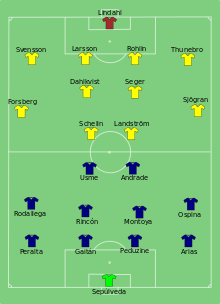 The Colombians before the game against North Korea

The Colombians then qualified for the World Cup in Germany for the first time. At the Sudamericano Femenino 2010 , Colombia finished second behind Brazil with a 1-0 win in the final against Argentina. In the preliminary round, they won three wins against Paraguay (3-0), Venezuela (5-0) and Uruguay (8-0, one the highest victories in Colombia) with only one 1-2 defeat against Brazil. In the final round they lost 5-0 to Brazil after a 1-1 draw against Chile, but the 1-0 win against Argentina on the last day of the match brought Colombia instead of Argentina the ticket to the World Cup. The team also qualified for the women's football tournament at the 2012 Olympic Games .

In Germany, Colombia was drawn into a death group with three teams from the top 5 of the FIFA world rankings : USA (No. 1), Sweden (No. 3) and North Korea (No. 5). Colombia was therefore considered an outsider and only the amount of defeat was questionable. In their first World Cup game against Sweden they kept the 0-0 for 56 minutes, but then had to accept the 0-1, which remained until the end. They then lost 3-0 against the world number one, but that was not a humiliation either. Since North Korea had also lost to Sweden and the USA, it was no longer possible for North Korea and Colombia to advance to the quarter-finals after two games. In the last game they split goalless and were allowed to go home. But since two North Korean players subsequently tested positive for doping, North Korea was immediately banned from the next World Cup. The USA and Sweden finished second and third in the final standings, which added value to the narrow defeats against these teams. 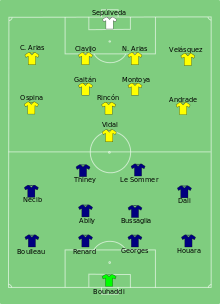 For the third World Cup in North America, the number of participants was increased to 24 and a third South American team now had the chance to qualify for the World Cup in Pan-American playoffs against a CONCACAF representative. But Colombia didn't have to take this detour. At the Sudamericano Femenino 2014 , which again served as qualification for the World Cup, the Colombians won the group stage with four wins against Uruguay (4: 0), Venezuela (4: 1), Ecuador (1: 0) and Peru (1 : 0) through. In the final round it was only enough to win 0-0 against Argentina at first, but hosts Ecuador were then defeated 2-1, so that a 0-0 win against Brazil in the last game was enough for 2nd place, which allowed them to participate in the World Cup. The team also qualified for the women's soccer tournament at the 2016 Olympic Games . With a 3-2 deficit in the last game against Argentina, hosts Ecuador were able to achieve at least 3rd place and thus the playoffs against Trinidad & Tobago. With a last-minute goal in the last game of the World Cup qualification, Ecuador became the last team to qualify for the World Cup for the first time.

When the groups were drawn, Colombia was not seeded and was drawn into Group F with France . Other opponents were England and Mexico .

In the first game against Mexico, against which they had never won, it looked like another defeat for a long time. Shortly before the end, Daniela Montoya was able to equalize with the first World Cup goal for Colombia. A surprise coup then succeeded against World Cup favorites France and the first World Cup victory. Before the last group game against England, Colombia was already in the round of 16 due to the results of the other groups, then lost to England and also the round of 16 against the USA, where substitute goalkeeper Catalina Pérez received the red card after an emergency brake in the penalty area .

The third World Cup in Europe will then take place without Colombia. Although the Colombians prevailed in the preliminary round of the 2018 South American Women's Soccer Championship in Chile with three wins and one draw against the hosts, scoring 14-2 goals, but in the final round they lost 3-1 to Argentina , played again a draw against Chile and then lost to Brazil 3-0. This put them in last place and had to give Brazil and Chile, which qualified for the first time, the direct World Cup starting places and Argentina the chance of qualifying in the domestic American playoffs. After all, Catalina Usme was the tournament's top scorer with nine goals, but scored them all in the first round. Due to the missed qualification, Colombia fell two places in the all-time table.

Colombia has played seven World Cup games so far, one has been won, four lost and two have ended in a draw.

Colombia never played in the opening game, never played against the hosts and defending champions. Once the team played against the eventual world champion and in the last game against a current continental champion. The first three games were the first against the respective opponents, and there was another at the 2015 World Cup against England. The most frequent opponents are the USA with two games, all others are unique so far.

The only win so far (against France) is also the highest against this team.

The Colombian team suffered their biggest defeats at a World Cup tournament against these teams: