The article provides a detailed account of the Canadian women's national football team at World Cups . Canada was able to qualify for six women's World Cup finals and was once automatically qualified as the host. The Canadians were only unable to qualify for the first World Cup in 1991, when the CONCACAF teams were only given one starting place. The best position so far is fourth place at the 2003 World Cup. In addition, the quarter-finals were reached at the 2015 home World Cup, otherwise the team was always eliminated in the group stage. Canada ranks 10th in the all-time table .

The national team at world championships

World Cup 1991 in the People's Republic of China

Canada was unable to qualify for the first women's World Cup . A tournament in Port-au-Prince , the capital of Haiti, served as North and Central America qualification . In the first round, the Canadians met Costa Rica , Jamaica and hosts Haiti . Canada prevailed with three wins and scored 17-0 goals. In the semifinals, Trinidad and Tobago were then defeated 6-0. In the final, they met the USA , who had also reached the final without conceding, but scored twice as many goals in the group stage. Canada lost 5-0 and since the CONCACAF teams only had one starting place at the World Cup, the USA was the only CONCACAF representative to go to the World Cup.

Four years later, they qualified for the second women's World Cup, as the CONCACAF teams now had two starting places. The qualifying tournament took place in Montreal and the opponents were the USA, Mexico , Trinidad and Tobago and Jamaica. Canada again won all games except against the USA and took second place again, which meant the qualification.

At the World Cup in Sweden, they met England in their first World Cup game and lost 3-2. After a 3-0 deficit, they were able to make the game exciting again in the final minutes. First, Helen Stoumbos scored 1: 3 with the Canadians' first World Cup goal in the 87th minute and then Geri Donnelly also made it 2: 3 in stoppage time, but it stayed. Against Nigeria followed a 3: 3 after a 2: 0 and 3: 1 lead and against the eventual world champions Norway a 0: 7. Since Canada had conceded one less goal against Norway than Nigeria, the team finished third, but were eliminated as the worst third because the other two group thirds had won a game. Canada was therefore not qualified for the first women's football tournament at the 1996 Olympic Games in which only the eight best teams from the World Cup could participate.

The USA did not have to qualify as hosts for the third World Cup. So there was one less stumbling block for Canada in qualifying. This took place as the 1998 CONCACAF Women's Championship in Canada and Canada used on the one hand the home advantage and on the other hand the absence of the USA to win the tournament. In the preliminary round, the Canadians achieved their highest international win against Puerto Rico with a 21-0 victory , with Silvana Burtini alone scoring eight goals. This was followed by a 14-0 win against Martinique , which as a non-FIFA member could not qualify for the World Cup. The group stage ended with a 4-0 win against Guatemala . A 2-0 win against Costa Rica followed in the semi-finals and a 1-0 win against Mexico in the final. Mexico was then able to prevail against Argentina in the Pan-American playoffs , so that for the first time three CONCACAF teams took part in the World Cup finals.

In the USA Japan were the first opponents and after 1-0 lead Canada had to be satisfied with a 1-1. Against defending champions Norway one goal this time, but again seven goals had to be accepted. A goal was also scored in the last game against newcomer Russia , but this game was lost with four goals against . Japan conceded fewer goals than Canada but also scored fewer. Canada finished third again with the same goal difference, but dropped out just like Japan and couldn't qualify for the women's soccer tournament at the 2000 Olympic Games .

The 2003 World Cup should actually take place again in the People's Republic of China . Because of the SARS epidemic, the tournament was moved to the USA at short notice. This was the second time that the World Cup took place in the USA, making the USA the only nation to host a soccer World Cup twice in a row. As hosts, the USA were automatically qualified again, but they still took part in the qualifying CONCACAF Women's Gold Cup 2002 , which they also won 2-1 against Canada with a golden goal . Canada was also qualified in second place.

In the USA Canada met Germany in the first game and the game ended like the last World Cup game four years earlier, with a 1: 4 defeat. In the second game, however, with a 3-0 win against Argentina, the first win in a World Cup game and since the last one against Japan was won 3-1, Canada reached the quarter-finals for the first time. Here they met the People's Republic of China and won 1-0. In the semi-final against Sweden they took the lead in the 64th minute, but had to accept the equalizer 15 minutes later and the 2-1 with four minutes before the end. In the subsequent small final they lost against the USA with 1: 3. However, fourth place is the Canadians' best position so far.

World Cup 2007 in the People's Republic of China

Four years later the World Cup took place in the People's Republic of China for the second time . The 2006 CONCACAF Women's Gold Cup again served as a qualifying tournament, with Canada and the USA only having to intervene in the semi-finals. Canada qualified for the World Cup and the final with a 4-0 win against Jamaica. Like four years before, this was lost 2-1 to the USA, but only after a penalty converted in the 120th minute.

In China, they faced Norway in their first game and, unlike twice before, they didn't have to accept seven goals, but only two, but could only score one themselves. Against Ghana it was 4-0, but because against Australia it was only 2-2, with the Australians not equalizing until stoppage time, Canada was eliminated as third in the group - albeit as the best.

Canada had also applied to host the 2011 World Cup, but lost the vote on October 30, 2007 against Germany. Canada had to qualify for sport. At the 2010 CONCACAF Women's Gold Cup , which again served as a qualifying tournament, the preliminary round was easily survived with three wins against Trinidad and Tobago (1-0), Guyana (8-0) and Mexico (3-0). Then Costa Rica was defeated 4-0 in the semi-finals. Since Mexico won a game in the Gold Cup against the USA for the first time in the other semifinals, which meant they lost a game in the Gold Cup for the first time, it was not the USA but Mexico who were the opponents in the final. Canada won the championship 1-0 for the second time and, like Mexico, qualified directly. With a 3-0 win against Costa Rica, the USA finished third, but this was not enough for direct qualification. Instead, the USA had to play two more games against Italy , both of which were won 1-0, making the USA the third CONCACAF team to qualify.

In Germany, Canada were drawn to the group with defending champions and hosts Germany, against whom they played the official opening game. After just 10 minutes, the defending champion took the lead 1-0 and increased to 2-0 shortly before half-time. In the second half, the German players gave up further chances to extend the lead, instead the record national player and goal scorer Christine Sinclair scored the next goal with a directly converted free kick. It was the first goal conceded for Germany after 678 minutes and after 621 minutes of play for Nadine Angerer . In the second game against France , the Canadians lost 4-0. Like Nigeria , which had lost to both of them, they were eliminated before the last group game. With a 0-1 draw against the African champions , Canada finished bottom of the group for the first time and went home as the worst team, but with the certainty that they were the only ones to be able to plan for the next World Cup.

The 2015 World Cup was awarded to Canada in March 2011 because Canada was the last interested party. Canada therefore did not have to qualify. When determining the venues and days of the match, Canada was identified as the group head of Group A. In the draw on December 6, 2014, China , New Zealand and the Netherlands, newcomers to the World Cup, were drawn.

Canada survived the group stage unbeaten with 5 points. In the second round, the team defeated Switzerland 1-0 and lost to the English in the quarter-finals with 1: 2.

In the qualification, for which the CONCACAF Women's Gold Cup 2018 served again, the Canadians qualified by reaching the final. In the preliminary round, the first game against Jamaica was won 2-0, then Cuba was defeated 12-0 and Costa Rica 3-1. In the semifinals followed a 7-0 win against Panama, which had come this far for the first time and had eliminated the three-time World Cup participant Mexico in its groups. Here made Diana Matheson her 200th international game as the second Canadian. The final, which was no longer decisive for qualification, was lost 2-0 to the USA. 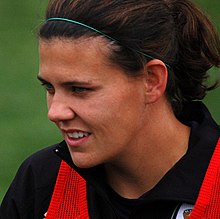 Canada has so far played against teams from all six confederations and also against the champions of other confederations, only not against an Asian and South American champion.

The most games played Christine Sinclair (21), who also scored the most goals (10) and wrote herself in the two record lists in the last group game against the Netherlands .

Note: Teams in bold were or are champions of their confederation at the time of the game.

Only against Ghana and Cameroon achieved the highest victories - as the only ones - in a World Cup game: 4-0 and 1-0 in the preliminary round in 2007 and 2019, respectively

The Canadian team suffered their biggest defeats at a World Cup tournament against these teams: