The district of Durrës ( Albanian : Rrethi i Durrësit ) was one of the 36 administrative districts of Albania that were abolished in the summer of 2015 after an administrative reform. The area with an area of ​​433 square kilometers belongs to the Qark of the same name . In 2011, the district had 202,971 inhabitants, the local authorities even stated 334,871 inhabitants (2009). Durrës was one of the Albanian districts with the greatest population density. The district was named after the capital, Durrës . 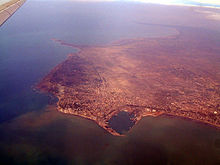 Aerial view of the western district of Durrës; it is easy to see how the city expands into the plain

The Durrës district comprised an area on the Adriatic coast of Central Albania. The area is mostly flat. Hills criss-cross the southeast and the entire eastern county boundary. The plains near the coast were partially swampy until after the Second World War . Today this area can be used for agriculture and is well developed. After the end of communism, many internal migrants from mountain regions in Albania settled here. The district is traversed from southeast to northwest by the river Erzen , which flows into a large bay ( Gjiri i Lalzit ). In the north, the bay is closed off by a narrow peninsula that ends in Cape Rodon .

The majority of the population lives in Durrës, which is expanding rapidly, and the small town of Shijak, a few kilometers to the east . The other areas are still very rural.

End of the motorway in Durrës

A large part of Albania's economy is concentrated on the Tirana- Durrës corridor , which includes the country's only international airport , Durrës, and the most important port . In the catchment area of ​​the two largest cities in the country, which benefits from the good transport links to Western Europe, numerous service providers from the transport industry and several factories of joint ventures have settled. Numerous service companies and production facilities of all sizes sprang up along the main roads.

At least in summer, tourism is now one of the most important branches of industry in the region. One hotel after another has been built on the beach south of Durrës. Durrës Plazh has developed from a former communist holiday village with a few holiday hotels and guest houses into a small town with thousands of hotel beds and extensive additional infrastructure for holidaymakers. Many guests come from Tirana and other northern Albanian cities. The majority, however, are Albanians in exile on home leave or Albanians from Kosovo and North Macedonia .

Durrës is a transport hub in the country. Since the hill country at the Bay of Durrës extends to the coast, this is a bottleneck in Albania's north-south traffic. In the meantime, a motorway ( SH2 ) connects the capital Tirana with Durrës, which is continued to the south as an expressway ( SH4 ). The Albanian Railway is based in Durrës.

The area of ​​the former district today belongs to the municipalities ( Bashkia ) Durrës and Shijak .