The Kulkwitzer See is a lake in the Central German Lake District , which emerged from two former brown coal opencast mining areas southwest of Leipzig . From 1864 coal was mined here, initially underground and from 1937 in opencast mining . The two remaining open-cast mining holes were flooded from 1963 and opened as a recreational area in 1973.

Earthworks at Kulkwitzer See, May 1973

There are extensive tourist facilities: several bathing beaches - on the west bank also a handicapped accessible, a circular hiking trail, a boat restaurant, the Red House restaurant (formerly the control center of the opencast mine) as well as other restaurants and snack bars, a campsite, a water ski facility, a sauna, a high ropes course, a toboggan hill, diving , sailing, boating and surfing opportunities . The cycle path around the lake was handed over in 2018. 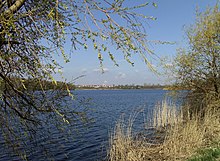 View from Lausen to Markranstädt

The lake is colloquially called Kulki by the people of Leipzig . Marathon and triathlon events, lake festivals and other sporting events have also been held here since the 1970s.

The lake has been operated by the "Kulkwitzer See recreation area" association since the political changes in 1989/1990. After several incorporations, two cities belong to this - Leipzig and Markranstädt. The association is represented by the association assembly. The chairman is the respective mayor of the city of Markranstädt. In 2003, the Zweckverband outsourced the operation of the lake to an external, private business provider - LeipzigSeen GmbH, based in Leipzig.

Due to its underwater flora and fauna and its good visibility, the lake is one of the ten best diving waters in Germany and attracts around 35,000 overnight stays by tourists, primarily divers from all over Germany and Europe, every year. Together with bathers, anglers and surfers, around 500,000 visitors visit Lake Kulkwitz every year.