Müden (Aller) is a municipality located on the Aller in the west of the Gifhorn district on the border with the Celle district .

Müden is located on the southern edge of the Lüneburg Heath , about 20 km from Gifhorn , 50 km from Hanover , 30 km from Celle , 35 km from Braunschweig and 40 km from Wolfsburg on the Aller .

In Müden (Aller) from the discharges resin coming Oker in the Aller. Depending on the season, both rivers are sometimes very watery.

The municipality of Müden has a total of 5358 inhabitants and is divided into the following districts (the number of inhabitants in brackets): 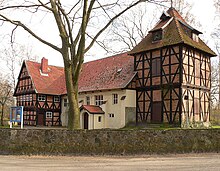 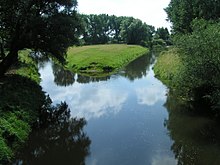 The Oker flows into the Aller (right)

Müden was in Muthiwide (originated around 815 ), one of the 17 Saxon founding districts of the Hildesheim diocese . The oldest written mention of the place goes back to the year 1022. In the deed of donation from Hildesheim Bishop Bernward of November 1, 1022 for the St. Michael monastery in Hildesheim, among other things, is listed: "item Mutha in pago Muthiwide" ("also tired in the Untergau estuary forest"). Muthiwide, the Latinized form of the Old Saxon term "Muthiwiddi" (Muth = mouth), refers to the name of a Untergau in the Loingau. Gaue were established as regional administrative units in the time of Charlemagne around 793.

The St. Petri Church, one of the oldest churches in the area, was dedicated to the Archdeaconate Church in the Middle Ages , to the Apostle Peter. It belonged to the "Bann" Schmedenstedt near Peine and this in turn belonged to the Diocese of Hildesheim. There, the Müdener Kirche is already mentioned in a document dated July 8th, 1295. Pastor Heinrich Hoffmann, who officiated there from 1646 to 1676, wrote in his church book in 1668 (analogously): “And that Müden was a large parish is evident from the tithe given by the Hohner, Spechtshörner, Ummerschen, Wilscher, Kästorfer, Gilder , Ettenbüttler, Böckelser still have to give today because they belonged to this parish before. "

According to a table from 1754, Müden had 40 landlords at that time (but only 15 ladders, 4 hooks and 6 buckets for effective fire fighting).

As early as 1826, there were “stately fire engines” in the Eicklingen office in Groß Eicklingen and Wienhausen and municipal fire engines in Müden (Aller) and Bröckel .

The Müden-Flettmar irrigation cooperative was founded around 1860. It got its water from the Meinerser mill canal. Only meadows south of the Aller were supplied.

The volunteer fire brigade was first founded in 1882, but was soon disbanded. A new establishment took place in 1934. On August 11, 1888, a fire disaster occurred in Müden, which reduced several buildings to ashes.

In Müden, the now no longer existing Mundburg was located on the Aller. According to the history of the 19th century, it was laid out on behalf of Bishop Bernward in the fight against the Wends in 1013.

The current council of the community of Müden (Aller) consists of 1 councilwoman and 16 councilors from the following parties and obtained seats:

The mayor of Müden (Aller) is Horst Schiesgeries (CDU). His deputies are Timm Bussmann (CDU) and Werner von Grünhagen (SPD).

The design of the municipal coat of arms of Müden comes from the heraldist and coat of arms painter Gustav Völker , who designed all coats of arms in the Hanover region . The coat of arms was approved by the municipal council on April 1, 1957 and approval was granted on January 10, 1958 by the Lower Saxony Minister of the Interior .

Municipalities in the Gifhorn district

Districts of the community of Müden (Aller)