National and Kapodistrian University of Athens

The National and Kapodistrian University of Athens ( Greek Εθνικό και Καποδιστριακό Πανεπιστήμιο Αθηνών , Ethniko ke Kapodistriako Panepistimio Athinon ) is the oldest of the modern universities in the eastern Mediterranean and had 2014 enrolled 104,000 students, the largest presence university in Europe.

The main building as part of the Athens Trilogy designed

On May 3, 1837, the Ottonian University was founded by Otto I. and later named after Ioannis Kapodistrias . When it was founded, it was the first university in the Eastern Mediterranean and the Balkans and consisted of the four faculties of theology , law , medicine and art (the latter also included the faculties of applied science and mathematics ). In line with the prevailing currents at the time, the organizers of the university, Georg Ludwig von Maurer and Joseph von Armansperg, oriented themselves towards the German educational ideas of Fichte and Humboldt . In the first year the university had 28 professors, a quarter of them were German scholars who came to Greece as Philhellenes during the Greek War of Independence or who accompanied King Otto in 1833. In November 1841 the university moved into the new main building. Theodor von Heldreich , director of the botanical garden, took over the post of curator of the university's natural history museum from 1858 to 1883 . In 1864 the Ionian Academy was closed and the university was enriched by many important professors.

In 1904 the university was split into two largely self-sufficient areas (arts and natural sciences). This was later withdrawn with the establishment of new departments. Between 1895 and 1911 the number of students was about 1,000 a year, while the number of those students who devoted themselves to law between 1837 and 1975 remained relatively constant at 43%. Also, no new faculty was founded during that period: dentistry was merely split off from medicine, just as mathematics was split off from philosophy. There were 5 students per professor in 1837, this number changed until 1975 and was finally 1 in 132. Since 1954 there have been admission restrictions at the university. From 1960 the move to the new Ilissia campus took place. Some of the old buildings are still in use, such as the main building designed by Theophil Hansen and the library. 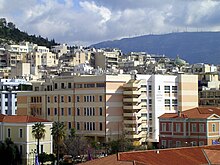