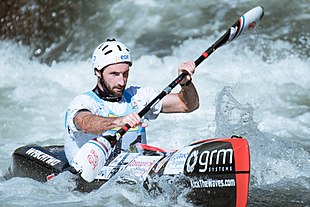 Whitewater racing (also whitewater descent , canoe descent ) is a competitive discipline in canoeing . The aim is to navigate a whitewater route by boat in the shortest possible time. For a white water race, the water used must have at least level III. A boat for whitewater racing is usually referred to simply as a downhill boat .

White water racing is to be distinguished from the Olympic canoe discipline canoe slalom , which is colloquially known as canoe white water. In white water racing, the highest award attainable is the world championship title. In addition, there are so-called extreme white water races in which routes up to white water V and VI are driven. These are not carried out in racing boats, but in ordinary white water boats.

The first recorded whitewater regatta took place on 16./17. July 1921 on the Isar. The first Enns regatta followed in 1922, the great Salzach regatta in 1923 and the first whitewater regatta on the Traun in 1925. It was not until 1933 that the white water runs and the canoe slalom introduced on a lake in Switzerland in 1932 developed into the first white water slalom on October 8, 1933 on the Aare at the Rupperswil weir (WW III - IV). After the Second World War , it was also the Swiss, on whose initiative the canoe slalom was reintroduced with a proper competition system. The white water run was only taken note of again on the initiative of the Englishman John Dudderidge at the ICF Congress in 1954. At the ICF congress in Ljubljana in 1955 , the first independent international competition regulations for white water descent were adopted. However, the application made to hold world championships has been postponed for the time being. The increasing interest of the national associations finally led in 1958 at the ICF Congress in Prague to the decision to introduce every two years whitewater world championships in the same region of slalom competitions. However, Switzerland was not able to host this additional event to the Slalom World Championships in Geneva in 1959 , so the French held the first white water world championships in Treignac on the Vézère in 1959 . In 1963 team competitions were introduced and in addition to the folding boat classes, titles in the RI, made of plastic kayaks, were awarded for the first time. In 1965 the folding boat classes were dropped from the program.

Until 1995 the white water world championships, consisting of slalom and downhill competitions, took place in one country. In 1996 the world championships in white water descent changed to a two-year rhythm in the even years, while slalom, which was included in the Olympic program in 1992, initially remained in the two-year rhythm in the uneven years.

In whitewater racing, a distinction is made between sprint and medium-distance competitions. Since downhill races were initially held as long-distance races, the longer middle-distance races are called Classic .

The route length for the classic whitewater run is 4-8 km. Depending on the flow speed, this corresponds to travel times of 12 to 20 minutes.

Since the beginning of the 1990s there has been a so-called white water sprint in addition to the classic racing distance, known as the Classic . The sprint is done in two runs on a 200–600 m long white water course, the best running time counts. At major competitions, the winner is then determined in a final of the best 10-15 athletes (depending on the category) in a single run. The athletes need 45-90 seconds per run, depending on the factors mentioned above.

Individual and team competitions are held over both routes. A team consists of three boats of the same boat class that travel the route at the same time. The travel time is measured from the start of the first to the arrival of the last boat. All three boats started must have crossed the finish line within ten seconds.

White water racing is practiced in single kayaks (K1, KI) and single (C1, CI) and two-person canoes (C2, CII). As in all canoeing competitions, women were not allowed to start in the Canadier for a long time. The official reason was that women would be physically harmed by driving a canoe. The only exception to this ban was mixed canoes until 1981. The Canadian classes have been open to women since 2010.

According to the competition regulations (WB), the boats must meet certain criteria.

The boats may not have a steering device and only have one keel line, one stern and one bow. For the 2013 season, the minimum weight has been reduced by 1 kg each.

In white water racing there are competitions in the following age groups:

From the beginning of a year, an athlete belongs to an age group in which the athlete reaches the specified age and not only from his birthday.

Internationally, there has been an U23 age group since 2015.

As of 2015, titles will be awarded in individual and team competitions in all boat classes (K1, C1, C2) for women and men in Sprint and Classic.

Since 2011, sprint world championships have been held in every odd year. The sprint titles are now awarded every year.

World and European championships in the junior class take place alternately, since 2015 together with the U23 age group.

In addition, there has been an annual World Cup series since 1989 . Since the 2012 season, the number of World Cup competitions has been reduced from 3 to 2 sprint and 2 classic competitions each. Before that there was a European Cup from 1974 to 1988, which was held every two years. A European Cup has been held again since 2015 - it started with a sprint in Augsburg.

In Germany there are annual German championships in all disciplines, boat and age classes.

Qualification races and the white water racing ranking list serve as qualification criteria for international competitions. The athletes can collect points in 4 competitions a year. The winner receives 300 points, the points of the defeated athletes are calculated from the driving times. Thus, the ranking reflects the performance over the period of the last ranking races.

Since 2010, a similar concept has been used to promote young talent under the name of the Schülercup.