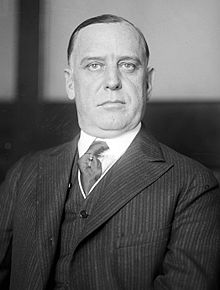 Henderson Madison Jacoway (born November 7, 1870 in Dardanelle , Yell County , Arkansas , †  August 4, 1947 in Little Rock , Arkansas) was an American politician . Between 1911 and 1923 he represented the fifth constituency of the state of Arkansas in the US House of Representatives .

Henderson Jacoway attended Dardanelle High School until 1887 and then Winchester Normal College in Winchester ( Tennessee ) until 1892 . After studying law at Vanderbilt University in Nashville and being admitted to the bar in 1898, he began practicing his new profession in his home town of Dardanelle. At that time he was secretary of the Dawes Commission, which dealt with the division of land in what was then Indian territory.

Between 1904 and 1908 Jacoway was a prosecutor in the Arkansas Fifth Judicial District. He became a member of the Democratic Party and was a member of its Arkansas board from 1910 to 1912. In 1910 he was elected to the US House of Representatives in Washington, DC in the fifth district of Arkansas , where he replaced Charles C. Reid on March 4, 1911 . After five re-elections, Jacoway was able to complete a total of six legislative terms in Congress by March 3, 1923 .

In 1922, he decided not to run again. He moved to Little Rock, where he was Vice President of People's Savings Bank from 1923 to 1929 . After that he worked as a lawyer again. From 1936 to 1945, Jacoway was the regional social security committee advisor for the states of Arkansas, Missouri , Oklahoma, and Kansas . He died in Little Rock in August 1947 and was buried there.