In the summer of 1501, during the reign of King Maximilian , a historical flood was caused by long rains, first on north German rivers and then repeatedly in the Alpine region . Severe flooding occurred in several Central European countries . On the upper Danube, where it is known as the Ascension pour because it took place around the Assumption of Mary (August 15), it was one of the heaviest flooding events of the 2nd millennium, but also an exceptional flood on the Elbe and Oder.

July 1501 must have been very rainy as early as July. Contemporary chronicles record multiple expansions of the Isar , Inn , Salzach , Elbe and Oder rivers . This distribution speaks for several Vb layers , i.e. Mediterranean lows moving northeast across Eastern Europe, which lead humid air masses from south, east to north to the north and east of the Alps as well as the Ore Mountains - Sudeten - Carpathian bend, which regularly causes severe flooding in Central Europe and then on the Central European rivers and streams.

In total, it should have rained continuously for 10 days from the evening before the Assumption Day. The amount of precipitation - comparable to the events in July 1954 , August 2002 and May / June 2013 - could have been 400 mm in about 4–5 days on the northern edge of the Alps.

Since the water levels of the Magdalenen flood in summer 1342, often referred to in the literature as HQ 10000 , have not been recorded (high water markings in the Danube region only appeared after the 1501 flood), it is difficult to say how the two events relate to one another - 1342 should be because of the larger size alone the more devastating. 6,000 people are said to have died on the Danube. The two Danube floods in June and August 1210 also claimed numerous victims .

On the Danube, the event is expressly referred to as “since time immemorial / centenary”, but all in all it falls into a phase in which numerous floods occurred. A series of severe floods in November 1489, May 1492, May and June 1497, even more severe June 1499, 1501, September 1503, August 1508 and then again in August 1520 are known from Wels an der Traun . Another such event cluster is found around 1570–1600. These unstable climatic conditions are probably related to the cooling of the climate at the end of the medieval optimum and the beginning of the Little Ice Age , the cold phase, which lasted until the middle of the 19th century.

The northern Alps and the catchment area of ​​the upper Danube in Bavaria and Austria, Bohemia and central Germany were severely affected.

Heavy and extensive rainfall in the second week of August 1501 in the northern eastern Alps and the foothills of the Alps in the catchment area of ​​the Danube , especially on the Inn , Salzach , Traun and Enns , led to one of the largest river floods in the recorded history of Central Europe.

“In 1501 from the virgin birth, there was such a great flood around the feast of the Assumption of the Virgin as it had never occurred in people's memory. She carried away the houses that were on the plain [Note: at river level], tore away entire villages, destroyed the bridges over the great rivers, drowned people and cattle, drowned the walls of the cities and small hills in the country covered them by their size. It affected not just a small region but, according to people's reports, numerous countries. As a plague of God, it made vineyards and orchards as well as practically all the fruits on the trees and fields that it seized worthless and destroyed them. "

And the Melker Annalen have something to report:

"Here and in parts of Bohemia, a large part of the people perished at night in the morasses created [by the flood], and according to Habakuk's prophecy, the people became sea fish."

It remains unclear to what extent this relates to the victims of the “terrible water pour”. On the one hand, there are hardly any explicit accidents in chronicles, on the other hand, there are increasing mentions of properties that were “that of…” in other sources - whether this refers to emigration or explicit flood victims remains to be seen. Lost and new properties due to changes in the course of the river are also mentioned in many ways.

Severe mudslides were likely to have occurred on the upper reaches of the Alpine rivers, so it is known that the Salzburg Oberpinzgau was "covered with large amounts of water and mud". The Salzburg basin on the lower Salzach is also likely to have been badly affected, as a result of which Archbishop Leonhard built a first dam from Hallein to Tittmoning .

The city chronicle of Augsburg reports heavy continuous rain and flooding of the Lech and Wertach from August 10th to 14th, 1501 . The Danube was already "extraordinarily high" in Regensburg . 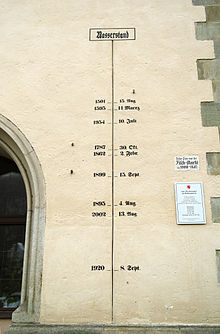 Markings of the historical peak levels including the incorrect marking for 1501 and still without marking for 2013 on the town hall tower in Passau; 1501 has now been corrected and added in 2013

The event brought Passau , at the confluence of the Inn and Danube rivers, one of the largest floods in its history. On August 15, 1501, the Assumption of Mary , the top of the flood reached the city, the old town was completely under water except for St. Stephen's Cathedral . Boats had to be taken to the Neumarkt and Heilig-Geist-Spital area. The city was an island for ten days. A later chronicler described the consequences:

“Of all the floods at Passau, however, that of 1501 under Bishop Wiligens Fröschl von Marzoll was by far the most terrible. Several still in different parts of the city, e.g. B. at the general hospital, at the Koller's brewery, at the orphanage garden, at the Ortthore, at house no. On the latter house there is a marble plaque with the following inscription: 'anno 1501 assumptionis marie is the water casting went to means of chraitz.' The Danube and the Inn swelled at the same time to such an extraordinary height that they were at the Heil. Spiritual hospitals flowed together, and on the whole new market communication could only be maintained by boats. The whole city formed an island and was completely cut off from the land. […] The flooding lasted 10 days and, according to the calculations at the time, rose to 14 cubits and 1 foot above the normal water level. According to the old chroniclers, the mischief that was caused was terrible, houses were undermined and collapsed, trees and tools floated on the unleashed waters. "

There is also a flood inscription in Mittich at the confluence of the Rott in the Inn (“what the nit on gross / sag on vnser women’s day / as in himel baid enpfanen / is the guss therefore gone / when one zalt 1501 jar / you may believe for bar ").

In Engelhartszell , a few kilometers downstream in the Upper Austrian Danube Valley , the level was 2 meters higher than in 1954 and 2002, in Linz by 1 meter. In Engelhartszell, for example, in the new toll house built at the beginning of the 16th century, the lower edges of the windows were kept above the water level of 1501 as far as possible. In Linz a marble plaque on the Heinrich-Gleißner-Haus on the upper Donaulände (today no longer in the original height, “Hereby disen stain beczaichene stat / how high the Dunaw has raised / This is done in the Monet Augusti / by the Römischen Künig Maximiliani / Da from Cristi gepurde was / Tawsennt Five hundred and ain Jar ”) and one at the parish church of the catastrophe, another, from the water gate , can be found in the state museum. The Mauthausen Danube Bridge , which is currently under construction, has been cleared near Enns . It could not be completed until 1505 - after the further floods in particular in 1503 and because of the subsequent lack of hydraulic construction timber.

From Melk it is reported that “the flood of water in the market church of the Holy Virgin […] stood a cubit high above the altar and knocked over the benches and burial mounds” and “overturned houses from the ground up, it carried two […] with the residents East of it ”(Melker Annalen; at that time probably still wooden houses). In Vienna (near Nussdorf ) the Danube flooded two meters higher than in 1954 and 2002. Comparable heights at the Reichsbrücke gauge would be around 10-10.3 m (1899, 1954 and 2002 each just over 8.6 m, in 2013 approx. 8 m).

Otherwise the flood hardly appears in contemporary sources in Austria below Melk, perhaps because there were no large settlements on the Danube, even Vienna was a long way from the river at the time. Linz , Krems / Mautern and Vienna were the only bridges over the Danube in the Habsburg duchy . The Kingdom of Hungary was Jagiellonian at the time and was at the front against the Ottomans .