The title of this article is ambiguous. Further meanings are listed under Kingissepp (disambiguation) .

Kingissepp ( Russian Кингисепп ; Estonian Jaama ; German Jamburg ) is a city in Leningrad Oblast in Russia with 48,488 inhabitants (as of October 14, 2010).

Kingissepp is 137 km southwest of Saint Petersburg and around 25 km east of the border with Estonia , on the Russian highway A180 and the railway line Saint Petersburg - Tallinn . The Luga flows through the city and flows into the Gulf of Finland 40 km north . The towns closest to Kingissepp are Ivangorod on the Estonian border (21 km west), Slanzy (40 km south-west) and Wolossowo (50 km east).

Kingissepp was founded in 1384, when a fortress of the Novgorod Republic was built here, the western border of which was formed by the Luga River. Initially, the place was called Jama (Яма), probably after the Finno-Ugric tribe "Häme", who previously lived on the southern coast of the Gulf of Finland. The fortress was made of stone and consisted of a wall with towers, similar to a medieval Russian Kremlin . It was attacked by the Swedes as early as 1395 and withstood the attack. 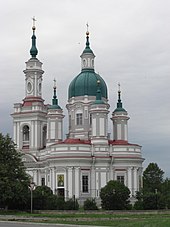 In the 15th and 16th centuries, Jama had not only military, but increasingly also economic importance as a craftsmen's settlement. Trade and iron forging flourished here to a great extent.

During the Northern Wars , Russia lost the fortress to Sweden twice: the first time from 1583 to 1595, later with the Peace of Stolbowo in 1617. After that, the place belonged to Sweden for almost a century until it was part of the Great Northern War in 1703 could be recaptured by Russia. During the time of the Swedish occupation, the remains of the former fortress were destroyed and the place was named Jamburg . He kept this name even after the reconquest by Russia and until 1922.

At the beginning of the 18th century Jamburg belonged to the statesman Prince Alexander Menshikov , later it came under state administration. The military importance of Jamburg no longer existed in the 18th century, instead the glass industry developed here. Jamburg reached its economic heyday at the end of the century; The main church of the city, the Katharinenkathedrale, which still exists today, also dates from this period. In 1784 Jamburg received city rights. In the 19th century, other industries and the railroad were added.

After the October Revolution of 1917 and the seizure of power by communists, Jamburg was given its current name in 1922 after the Estonian revolutionary Viktor Kingissepp . During the Second World War and the Leningrad blockade , Kingissepp was under the control of the German Wehrmacht , which operated a concentration camp here, among other things . The occupation of the city lasted from August 16, 1941 to February 1, 1944, when Kingissepp was liberated in the course of the Leningrad-Novgorod operation .

In the post-war period, the heavily damaged Kingissepp was largely rebuilt. Several memorials and memorials in the city today commemorate the events of the war.

Kingissepp is a member of the New Hanseatic League .

Sassnitz in Mecklenburg-Western Pomerania has been Kingissepp's twin town since 2003.