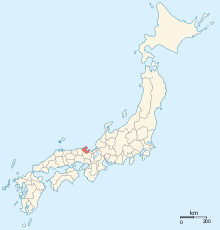 Tango ( Japanese 丹 後 国 , Tango no kuni ) was one of the historical provinces of Japan in the area of ​​today's northern Kyoto prefecture on the Sea of ​​Japan . Tango bordered the provinces of Tajima , Tamba and Wakasa .

The area was already populated during the Kofun period in the Takenogawa river basin ( 竹 野 川 流域 , Takeno-gawa ryūiki ). It is believed that an independent kingdom was located here.

In the 7th century the province of Tamba was established. On the 3rd day of the 4th month 713, the northern part with the Kōri Kasa , Yosa , Tamba , Takeno and Kumano was split off as a tango ("rear tamba"). Due to its distant, northern location, it is also known as Okutan ( 奥丹 , "Inner Tamba") or Hokutan ( 北 丹 , "North Tamba"). Both together are also called Tanshū ( 丹 州 ).

The provincial capital ( kokufu ) changed in antiquity and lay alternately in the area of ​​modern Maizuru and Miyazu .