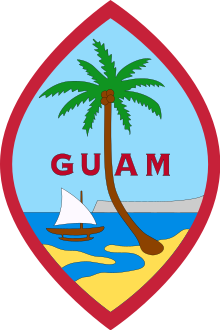 The Guam coat of arms has been in use since August 4, 1917 and was officially confirmed in 1930. It shows a view of the Agana River near the capital Hagåtña .

The outline of the coat of arms is that of a sling stone, which was used by the Chamorro earlier as a weapon and hunting utensil.

It shows a coconut tree that also  grows in sterile areas - in the sand on the beach - and thus symbolizes the population of Guam, which survives and grows under all circumstances. She survived genocides , natural disasters and famines . At the same time, the tree stands for the fact that the Guam people can feed themselves - not least thanks to the coconuts.

Behind the palm tree you can see a flying proa on the water . This ship of the indigenous population of Guam was a fast and agile boat with the necessary skill. This enabled the Chamorros to trade with distant islands. This symbolizes the freedom and courage of the residents of that time to sail fearlessly across the sea.

In front of the ship is the Agana River , which bears the same name as the capital of Guam, Hagåtña , in Spanish. This river, which is in constant exchange with the sea, is a symbol of the will of the people of Guam to share the resources of their land with one another.

The red border of the coat of arms represents the blood that residents of Guam shed during the Second World War and the time of the Spanish occupation.

The coat of arms is also shown on the flag of Guam .

Coat of arms and seal of the states of Oceania

Seal of the united states