Blau-Weiß 90 Berlin (officially: Sportliche Vereinigung Blau-Weiß 1890 eV) was a German sports club from Berlin-Mariendorf . He gained notoriety through his football department , which twice took part in the finals of the German football championship and was promoted to the Bundesliga in 1986 . After the license revocation in 1992, the association had to file for bankruptcy and was dissolved. After the dissolution, the SV Blau Weiss Berlin was founded as an unofficial successor club, which has had the traditional name Blau-Weiß 90 Berlin again since 2015.

Logos of the parent associations Union (left) and Vorwärts

The club Blau-Weiß 90 Berlin was created on July 27, 1927 through the merger of the Berlin FC Vorwärts 1890 with the Berlin TuFC Union 1892 . The BFC forward 90 was established on November 2, 1890, 1902 and 1903 Maerkisch and 1921 Brandenburg football champions. The club's greatest success was the entry into the final of the German football championship 1920/21 , which the team lost in Düsseldorf 5-0 to 1. FC Nürnberg . With Walter Fritzsche , Georg Schumann , Albert Weber and Karl Wolter Vorwärts produced four German national players.

The second parent club was the Berlin TuFC Union 1892, which was founded on June 8, 1892. Union became German champions in 1905 with a 2-0 final victory over Karlsruhe FV . Like merger partner Vorwärts 90, Union 92 produced four German national players: Paul Eichelmann , Otto Hantschik , Ernst Poetsch and Hans Ruch . In the mid-1920s, both parent clubs could no longer build on their sporting successes and wanted to counter the sporting downward trend with the merger. 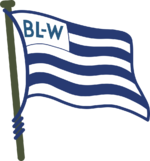 The hopes that were placed in the merger association could not initially be fulfilled. Blau-Weiß 90 was relegated from the Berlin Oberliga in the first season after the merger and did not return until 1930. Three years later, the Mariendorfer were among the founding members of the Gauliga Berlin-Brandenburg . After two fourth places, blue-white slipped down the table and had to relegate in 1937. A year later, due to the better goal quotient compared to the BSG Lorenz Berlin, the direct rise was achieved. At the same time, the most successful phase in the club's history before the Second World War began . After a 1-0 win on the last match day against SV Elektra Berlin , the blue-whites immediately secured the Gaume Championship due to the better goal quotient against Hertha BSC .

The Mariendorfer started the final round of the German championship with a 3: 3 against Hamburger SV and a 2: 1 at SV Hindenburg Allenstein . From the following four games, however, only one point was added by a 1: 1 at VfL Osnabrück and Blau-Weiß finished last in the group. A year later, the team missed the title defense when they lost in the finals for the Gaume Championship Union Oberschöneweide . From 1940, the then German record international player Ernst Lehner strengthened the Mariendorfer, who were again Gaumeister in 1942.

Blue-White took part in the German championship again. The Mariendorfer reached the semi-finals via the stations LSV Pütnitz , SV Dessau 05 and VfB Königsberg . There the team lost to FC Vienna Wien with 2: 3. Two weeks later, blue-white defeated Kickers Offenbach 4-0 in the game for third place . Lehner returned to Augsburg at the end of the season and blue-white sank back into mediocrity.

After the end of the war, all Berlin football clubs were dissolved and replaced by 36 municipal sports groups. The players from Blau-Weiß now appeared as SG Mariendorf , when the team reached the finals of the Berlin championship and was there last. This was followed by three years in the Berlin City League , from which the Mariendorfer relegated in 1949. At the same time, the SG was allowed to take on the name Blau-Weiß 90 Berlin again. The direct resurgence was missed athletically; but blue-white moved up due to the withdrawal of the East Berlin teams in the upper house, where it fluctuated between mediocrity and relegation battle. In 1956, 1957 and 1959 it was enough for fifth place before the team had to relegate in 1960.

Three years later, the Mariendorfer secured the championship in the Berlin amateur league and qualified for the German amateur championship in 1963 . In the qualification, the team met Lüner SV , from which they separated 3: 3 after extra time . Lüner won the replay 2-0. From 1963, Blau-Weiß played in the second-class Berlin Regionalliga , where the Mariendorfer initially did not get beyond mediocrity. This changed when the club sold its own sports field for 900,000 marks in 1969 and signed numerous former Bundesliga players.

In 1970, the team missed the promotion round in third place, one point behind Wacker 04 Berlin . A year later, Blau-Weiß was third, one point behind runner-up Tasmania Berlin . Wolfgang John was the top scorer this season with 39 goals . It was not until 1973 that the Mariendorfer regional league champions were promoted to the Bundesliga. Here, however, the blue-whites had no chance. Right at the start, the team lost 7-0 at Fortuna Cologne . They landed their only victory in the meaningless last game with a 3-2 win against 1. FSV Mainz 05 . A year later, after Tennis Borussia Berlin's promotion to the Bundesliga, the club was given the opportunity to move up to the newly founded 2nd Bundesliga . The Mariendorfer waived and the free place went to 1. FC Mülheim .

The Mariendorfer continued to play in the third-class amateur league in Berlin from 1974 and in 1978 had to relegate to fourth-class for the first time. As a runner-up in the regional league, he was promoted again directly. After two years of relegation battle, it went back down to the state league in 1981. This time it took the blue-whites two years to return. In the spring of 1983, advertising salesman Konrad Kropatschek joined Blau-Weiß. Kropatschek wanted to sign top-class players for the club on his own account, in order to sell them later for expensive money. According to the contract, Kropatschek was entitled to the income. The association agreed without dealing with Kropatschek's past. In 1976, Kropatschek was sentenced to four years imprisonment for credit fraud and was searched for unsolved via the ZDF program Aktenzeichen XY… .

Thanks to the new sponsor, Blau-Weiß was able to significantly strengthen its team and was promoted to champions in the league season 1983/84 . In the following round of promotion to the 2nd Bundesliga, the Mariendorfer made the march perfect after a 2-1 win over 1. FC Bocholt . In the 1984/85 season , seventh place was reached and blue and white took over the sporting supremacy in the city. A year later , the Mariendorfer turned the football ranking of Berlin upside down when they moved up to the Bundesliga and Hertha BSC and Tennis Borussia Berlin were relegated to the top division. The striker Leo Bunk was the top scorer in the 2nd Bundesliga with 26 goals , and the team then performed together with the pop singer Bernhard Brink in the current sport studio with the song "We are hot for blue and white".

Behind the scenes things were turbulent during the promotion season, as the patron Kropatschek got more and more into financial difficulties. As contractually agreed, the rights to transfer proceeds were pledged to third parties . Sometimes the rights to one player were pledged to several creditors. Finally, in November 1985, the association terminated the contracts with Kropatschek, who owed the Mariendorfers over 1.3 million marks. The financial rescue for Blau-Weiß came through the Nuremberg plumbing merchant Hans Maringer, who was also a believer in Kropatschek.

Due to the financial situation, the club could not afford any expensive newcomers. After two defeats at the start, the first win of the season was achieved on matchday three with a 3-2 win over Borussia Mönchengladbach . This was followed by a series of 21 games without a win, before the blue-whites were able to win again with a 3-1 at Eintracht Frankfurt . Despite this negative streak, the Mariendorfer still had a chance of staying up on the penultimate matchday, which were nullified with a 1: 2 defeat at Hamburger SV. With a 2-2 draw against FC 08 Homburg , the Berliners said goodbye to the Bundesliga, while striker Karl-Heinz Riedle , who scored ten times, moved to Werder Bremen for 1.3 million marks .

Nevertheless, the club, which was in debt with 1.4 million marks, faced an uncertain future. After relegation, blue-white achieved several placements in the front midfield. In the 1988/89 season , the team gambled away the possible return to the Bundesliga with three defeats in the last three games. Since Hertha returned to the 2nd Bundesliga this season, the financial problems only increased. For example, Blau-Weiß and Hertha were supported by the same scaffolding company, which later concentrated entirely on Hertha BSC.

The audience figures also fell sharply. While an average of 6,820 spectators watched the home games in the 1988/89 season, the number fell to 2,355 in the 1990/91 season. In the 1991/92 season , the Mariendorfer had to go into the relegation round and occupied the third from last place, which entitled to the relegation round with TSV 1860 Munich and TSV Havelse . Nothing came of this, however, as the German Football Association Blau-Weiß 90 withdrew the license for the 2nd Bundesliga. On June 28, 1992, the club was forced to file for bankruptcy due to the withdrawal of its license . The association was dissolved and deleted from the association register.

Dissolution and establishment of a successor

The SV Blau Weiss Berlin , founded in 1992, is an independent club that continues its sporting tradition after the dissolution of Blau-Weiss 90. However, he is not the legal successor to Blau-Weiß 90 and does not refer to it in his articles of association. The first men's team had to start over in the district league C, the lowest division. Four ascents in a row brought SV Blau Weiss into the national league, from which the club was relegated in 2006. After several years in the district league, he was promoted back to the regional league in 2013. With John Anthony Brooks , SV Blau Weiss produced a US national player. The first women's team has been playing in the fourth-class Berlin Association since 2013.

Blau-Weiß 90 played from 1927 to 1966 on the sports field on Rathausstrasse , which was also known as Union-Platz or Blau-Weiß-Platz . The Mariendorfer then played either in the Friedrich-Ebert-Stadion in the Tempelhof district or in the Mommsenstadion in the Charlottenburg district . After promotion to the 2nd Bundesliga in 1984, the blue-whites played in the Berlin Olympic Stadium . After the fall of the Berlin Wall , the Mariendorfer played a few home games in the Friedrich-Ludwig-Jahn-Sportpark , which is located in the former eastern part of the city.

The numbers in brackets refer to the appearances and goals in the 1986/87 season.