The Corps Palatia Munich is a student association in the Munich Senior Citizens' Convention . The corps is a member of the Kösener Seniors Convents Association and is responsible for the scale and color . It brings together students and alumni from Munich universities. The corps members are called Munich Palatinate.

On June 20, 1813, students from the Upper Palatinate founded a Palatinate Landsmannschaft at what was then the University of Landshut , the state university in the Kingdom of Bavaria . To mark their origins, they chose crimson for Regensburg , the capital of the Upper Palatinate, royal blue and silver-white for Bavaria. After temporary suppression by the university authorities, it was reconstituted in the winter semester of 1816/17 and formed a senior citizens' convent with Swabia and Bavaria . In the fall of 1826, the State University was moved from Landshut to Munich and reopened on November 15, 1826. The four corps at that time also moved to Munich and were officially recognized by a royal rescript of July 31, 1827.

In 1847 the Palatia got caught up in the scandal surrounding Lola Montez , the concubine of King Ludwig I of Bavaria . Montez began a sexual relationship with Elias Peißner, then senior citizen of the Palatinate, in 1847 and was able to get him and some of his corps brothers to join her as bodyguards under the new corps name Alemannia. When those involved were excluded from the Palatia because of this, the royal request followed to reverse this. Since the Palatia refused to do this and all the other Munich corps were also hostile to the Alemannia, there were unrest in the university and protests by the Munich population. Among other things, Karl von Schrenck von Notzing , Bavarian Minister of Justice and old man of the Palatia, signed a memorandum against Lola Montez and in February 1847 resigned from the civil service with all other ministers.

On February 9, 1848, Ludwig ordered the immediate closure of the University of Munich until the winter semester 1848/49 and ordered all students to leave the city within three days. On February 10, 1848, students and other citizens moved in front of the residence and riots broke out in the city. Due to public pressure, the university reopened the next day and the king decided to exile his beloved, who fled to Switzerland on February 11th. The unrest surrounding the March Revolution spread to the storming of the Munich armory on March 4, 1848. On March 16, 1848, there was renewed unrest because Montez had come back to Munich after his exile. Ludwig had to have the police searched for her on March 17th. Finally, King Ludwig I had to abdicate on March 20, 1848 in favor of his son Maximilian II .

The corps in the Kösener SC association

In 1862, the Munich Corps, including Palatia, became a member of the Kösener Senior Citizens 'Convents Association, which has united the senior citizens' conventions of several universities since 1848. In the 1870s Palatia established relationships with corps in other university towns , for example with Suevia Freiburg in 1877 , and cultivated a lively exchange of members. On May 18, 1877, the conversion from the life corps to the weapons corps was formally completed. In 1882, the corps principle was laid down again in the statutes, which forbade the Palatine from membership in other corps. At the same time, the official relationship with Suevia Freiburg was ended. In 1901/02, the company built its own corp house on Reitmorstrasse in Munich-Lehel . Corps operations were restricted during the First World War. An entertainment home for the wounded was housed on the corp house from 1915 to 1917 .

Due to increasing repression by the Nazi regime, Palatia officially ceased operations on May 18, 1936. Scale lengths were struck up until 1937. In 1938 the old rulers took over the care of the Nazi comradeship Friedrich Friesen , who found their domicile in the Palatinate House . Around 70% of the old men also belonged to the comradeship, which increasingly assumed corporate features. She placed herself in the tradition of the corps, but did not fight any qualifying degrees.

On January 20, 1948, the Corps was reconstituted. In 1953 the new house in Koeniginstrasse was ready to move into. Multiple memberships with other corps have been permitted again since 1969.

Motif: corp house in the Königinstr. 49 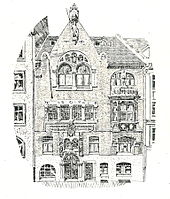 The first house of the Corps Palatia Munich at Reitmorstraße 28

Today's corp house at Koeniginstrasse 49 was opened on December 6, 1958. It replaced the old corp house in Reitmorstrasse, which was built by Eugen Drollinger and destroyed in the Second World War. On the property acquired in 1948, a one-storey building with a bar, dining and convent room, paukkeller, kitchen and caretaker's apartment was built in a first construction phase in 1953. The four-story extension took place from spring to November 1958. The new building also comprised two floors with ten activity rooms, making Palatia one of the first corps to have its own living area for active people.

Holder of the Klinggräff Medal