As the third corps next to Palaiomarchia-Masovia Kiel and the Munich WSC-Corps Normannia-Vandalia, Palatia-Guestphalia gives a double band, namely the bands of the two mother corps connected with a silver clasp (see below). Palatias colors are red-white-violet (colors read from above) with silver percussion , Guestphalias green-white-black (colors read from below) with silver percussion. The Westphalia ribbon is worn over the Palatinate ribbon. The basic color is green. The Chargierten wear the white striker of the Strasbourg Palatinate on official occasions. Both coats of arms of the mother corps are used as double coats of arms.

Palatia had been expelled from France after the First World War . Guestphalia was unable to return to the Soviet zone of occupation (later the German Democratic Republic ) after World War II . In the post-war period , Jakob Georg Zahn, Arthur Berger and Max Wassermeyer brought together the completely different corps. Zahn had been a Jenenser Westphalian and Hanoverian since 1906 . Berger was Isare (1895), honorary member of the Prague Franks (1922) and EM of the Palatinate. Wassermeyer was a Marburg Teutone (1897) and EM of the Palatinate (1898). With the suspension of Palatia, the two expelled corps merged on May 5, 1952. This makes “PG” one of the youngest corps in the Kösener SC Association.

Former house of the Corps Guestphalia in Jena, Wagnergasse 26a

The Corps Guestphalia Jena, founded on March 10, 1841, was one of the most traditional German student associations and, prior to its dissolution by the National Socialists, became known in Jena for its active fencing activity . A member of this corps, the timpani doctor Friedrich Immisch , also significantly reduced the dangers of the mensurfing by developing and introducing iron timpani glasses at the end of the 1850s , which have been generally worn since then. In 1934, some members of Guestphalia Jena tried in vain to transform the Kösener Seniors' Convents Association into an organization based on National Socialist principles in order to be able to maintain the corps under the Nazi tyranny, but this failed due to internal and external resistance.

In the tradition of Guestphalia Jena, Palatia-Guestphalia has maintained one of the oldest cartel relationships with the Corps Hannovera Göttingen since 1848 . The cartel came into being after an invitation from Westphalia to the Hanoverians in Wöllnitz , at which the Hanoverians were invited to take part in Popp's XVI coronation . Cartels between corps are friendship agreements that are usually concluded within a certain circle. In the early days they were often broken for a trivial reason. 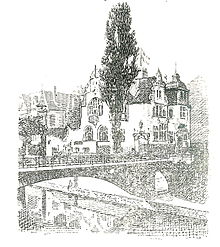 Former house of the Palatia in Strasbourg in Zimmerhofstr. 6th

The former house of the Palatia in Strasbourg, 2010

On May 10, 1873, Gerhard von Stramberg ( Rhenania Bonn ), Ferdinand Timme ( Isaria ) and Claus v. Oertzen ( Saxonia Göttingen ) Palatia as the second corps at the Kaiser-Wilhelms-Universität . This was preceded by violent disputes between Rhenania Bonn and Rhenania Strasbourg , at which v. Stramberg actually wanted to be active. PP suites and saber contracts were about to meet. There was close contact with the Saxon-Prussians , on whose student fencing weapons the first gauges were fought. The first friendship relationships were agreed with the Corps Rhenania Freiburg (1880) and the Corps Hannovera Göttingen (1883). The hundred-year cartel relationship with the Corps Teutonia Marburg was celebrated on October 8, 2005 at the Teutonenhaus.

At the end of the 1870s, Albano von Jacobi won Crown Prince Wilhelm to visit the Corps. In 1880, Palatia provided the Würzburg oKC chairman with Hans von Campe ( Nassovia ). When she was the presiding suburb corps in 1898, Georg Gottfried von Jacobi headed the oKC at the Rudelsburg . The Strasbourg-based Joseph Müller (architect) built the Corpshaus in Zimmerhoffstrasse. In the style of Neo-Renaissance designed it was inaugurated on July 18, the 1,903th The now Kaiser Wilhelm II sent his congratulations by telegram. The 150 old men donated the construction costs of 120,000 gold marks .

After the Peace Treaty of Versailles, like all German student associations, expelled from Strasbourg, Palatia was temporarily housed in Marburg . She was allowed to use Teutonia's corp house and was thus able to maintain a small corps operation. When she moved to Freiburg im Breisgau , she was not welcome. Hasso-Borussia mainly rubbed against the striker . After a long search, a piece of land was found in Bismarckstrasse (today Stefan-Meier-Strasse). The foundation stone laid on June 1, 1924 contains the Constitution and memorabilia from Strasbourg. At the inauguration on January 17, 1925, Gottfried von Jacobi spoke . Bruno von Waldthausen , an uncle of Paul von Waldthausen , made the financing possible with a very large donation and advised the planning. Without having seen the finished house, he died as an honorary member in June 1926. The modest wooden house impresses with its elegance and interior design. The city of Freiburg placed it under monument protection.

See also : List of student associations in Strasbourg , Seniors' Convent (college) and suburbs of the KSCV 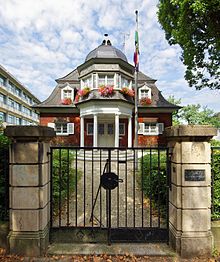 Immisch in the patching room