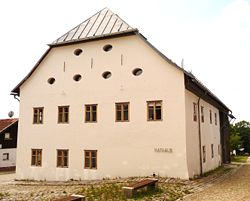 The town hall of Hinterschmiding

There are eleven districts:

The village in the former bishopric of Passau was first mentioned around 1400. It was located on the so-called Goldener Steig , on which salt was transported from the Danube port in Passau towards Bohemia. This found its way into the municipal coat of arms, on which a white horse loaded with a golden sack of salt can be seen. 1803 was the most of the high pin and the territory in favor of Ferdinand of Tuscany secularized ; it only fell to Bavaria in 1805 with the peace treaties of Brno and Pressburg. In 1818 Hinterschmiding became a political municipality and was given a free choice of mayor and municipal representatives.

In 1936 the place was raised to a parish. After the Second World War, an American prisoner of war camp, known as Camp Sonndorf , was set up in the community . After 1945 many expellees came to Hinterschmiding. From 1969 to 1970 the current parish church was built , the old church from 1927 was demolished.

On January 1, 1978, the municipality of Herzogsreut was incorporated into Hinterschmiding as part of the regional reform .

Since the local elections on March 16, 2014, the municipal council has been composed as follows:

The professional first mayor is Fritz Raab (non-partisan voter community). He took office on May 1, 2014.

In 2007 the following institutions existed:

In Hinterschmiding, cultural life is cultivated in many ways, whether visual arts , literature or music , there is something for everyone, especially the partnership with the choir of the University of Ostrava brings highlights in the musical field again and again.

Municipalities and unincorporated areas in the Freyung-Grafenau district