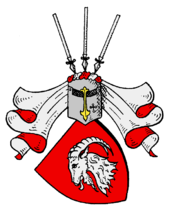 Coat of arms of those of Kameke

Kameke (also Kamecke , Kamke , Kamike or Kamnick ) is the name of an old Pomeranian noble family . The lords of Kameke belong to the ancient nobility in Western Pomerania and in the Duchy of Pomerania-Wolgast . The no longer existing place Camik on the island of Usedom is considered to be their headquarters .

The sex is related to the von Bonin family , who also have the same coat of arms . A person referred to in older literature descent from the Counts of Capri ( Capri ) in Italy is genealogically undetectable.

Camik, the ancestral seat of the family, is equated with Kamminke on Usedom , especially in older genealogical and regional historical literature , although the place has been localized west of Pudagla by various historians since the middle of the 19th century .

The first known ancestor of the family is Michael von Kameke , who is mentioned in a document from 1263. Branches of the family still exist today. In 1298 the knight Peter de Kamik is mentioned in a document. The lead name Peter was still often given to members of the family up to the 17th century. His descendant of the same name, Peter Kameke, was the councilor of Duke Johann Friedrich von Pommern (Duke of Pomerania-Stettin from 1569 to 1600). Another Peter Kameke († 1615) was in the service of various Pomeranian dukes for 42 years, among other things as a privy councilor , court marshal and castle captain.

Members of the family also came to Kurbrandenburg and held high state, court and military positions in the service of the Brandenburg electors. Ernst Bogislav von Kameke (1674–1726) from the Friedrichfelde family, lord of Cordeshagen and Hohenfelde , was appointed royal Prussian chamberlain , chief marshal, postmaster general and chief domain director in 1709 . Under his leadership, the royal offices and estates were converted into temporary leases. Through this reform, the state influence and the income of the crown domains could be significantly strengthened.

Paul Anton von Kameke from the House of Strachmin (1674-1717) was in high favor with King Friedrich I of Prussia . At the age of 22 he appointed him company commander and later colonel of the royal bodyguard . In 1715 he fought as a major general in the Pomeranian campaign against the Swedes and took part in the siege and conquest of Stralsund with distinction . But he was released from military service in 1716 and died in Strachmin in 1717 at the age of 43. His son Friedrich Paul von Kameke (1711–1769) had the Palais Kameke (since 1798 Palais Redern ) built on Pariser Platz in Berlin from 1729 to 1736 by the master builder Johann Friedrich Grael .

An important representative of modern times was the Prussian infantry general Georg von Kameke (1817-1893). 1873-1883 he was the successor of Albrecht von Roon , the Prussian minister of war .

In 1922 Kartz von Kameke founded the Moorgut Kartzfehn named after him in Bösel near Oldenburg , which has become one of the largest turkey breeding companies in Europe since 1957.

Friedrich Paul von Kameke (1711–1769), Rittmeister in the Prussian Gensdarmes regiment and castle captain , was elevated to the Prussian count status by Frederick the Great on July 28, 1740. However, the count's line already died out in 1841, almost 100 years later.

Coat of arms in the former district building in Greifswald

The family coat of arms shows a silver ibex head and neck turned to the right in red . On the helmet there are three fallen silver skewers ( boar feathers or gag skewers). The helmet covers are red-silver.