Novel about a crime

The seat of the investigators in most of the novels: the old Stockholm police headquarters on Kungsholmen 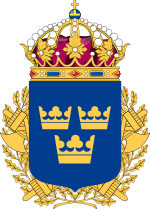 Coat of arms of the Swedish National Police Office (Rikspolisstyrelsen)

Novel about a crime ( Swedish novel om ett brott ) is a novel decalogy published between 1965 and 1975 by the Swedish author couple Maj Sjöwall and Per Wahlöö . The series was a worldwide success and was filmed several times. A fundamental innovation in the detective novel is the realistic depiction of the investigative activity as the interaction of many participants. Until then, the genre was dominated by the ingenious individual investigator, for example Sherlock Holmes or Hercule Poirot .

The main character in the series is the policeman Martin Beck, who is first assistant detective, then detective superintendent , and later head of the nationwide Swedish homicide commission .

While the figure of Martin Beck is still largely in the foreground in the first volumes, his employees move more and more into focus in later volumes. At the same time, in the course of the series, Sjöwall's and Wahlöö's claim to sharply criticize the conditions in the authorities and the Swedish state underground Erlander and Olof Palme becomes more and more evident , reflected by the work of the Swedish police.

The two authors were Marxists and based their novels on the police crime novels by Ed McBain , some of which Per Wahlöö had translated into Swedish in order to make their viewpoint critical of capitalism accessible to a wide audience through entertainment literature:

“The basic idea is to present in a long novel of around 3000 pages (...) a longitudinal section through a society with a certain structure and crime as a social function and its relationship to society as well as to the various moral forms of life that surround this society analyze."

With “crime” in the title novel about a crime is meant the capitalist society as a crime of the Swedish state against the working class. This title was used from the beginning in the Swedish original, but in German only when Rowohlt later republished all ten volumes in one cassette.

The novel about a crime was planned from the outset to consist of ten volumes, which appeared between 1965 and 1975 in the Swedish Norstedts-Verlag and were reprinted several times.

In Germany, the novels appeared as paperbacks in the series rororo thriller in the Rowohlt Verlag from 1968 onwards in translation by Eckehard Schultz (five volumes), Johannes Carstensen (two volumes), Hans-Joachim Maass (two volumes) and Dagmar-Renate Jenich (one volume ). An unabridged licensed edition appeared from 1973 in the GDR publishing house Volk und Welt . In contrast to the titles in Rowohlt, a literal translation of the original Swedish title was chosen for two volumes. The volume , which was partly played in Budapest, was published in the GDR as the last book in the series in 1988 in a double volume, the single volume followed in 1989.

In the fall of 2008, Rowohlt published a new translation of the entire series by three different translators, which received mixed coverage in the press:

“The Schultz translations were able to imitate the linguistic peculiarities of the original much more faithfully than the new ones, which have a disappointing tendency to flatten out. In Sjöwall / Wahlöö's prose there are very detailed, sometimes cumbersome sentence structures that are contrasted with a precise, strongly rhythmic form of dialogue. All this is smoothly smoothed out in the new transmissions, leveled and brought into a standard crime German. "

Overview of volumes and titles

Martin Beck is at the center of the novels. He was initially first assistant to the Reich Murder Commission in Stockholm and later rose to the position of commissioner and head of this commission. He has an unhappy marriage at the beginning of the series, but later separates from his wife. He has two children; He doesn't get along very well with his younger son Rolf, but he has a good relationship with his daughter Ingrid. After separation Beck receives a bachelor apartment in Stockholm's Gamla Stan in the old town and learns in the band closed and locked Rhea Nielsen, with whom he began a relationship. His best friend is his work colleague Lennart Kollberg. Martin Beck is calm, abstains from political comments and, despite his comparatively high position, has no professional ambitions. Especially after he was shot on duty at the end of the volume Das Ekel von Säffle and was incapacitated for several months, he was afraid of being promoted and just having to sit at his desk. In his free time he devotes himself to model shipbuilding and reads books about old sailing ships. Martin Beck has been a smoker for a long time, but after recovering from the gunshot wound he refrains from starting again. The reason for this is that the state tobacco monopoly has stopped production of its preferred variety, “Florida” with a cardboard mouthpiece, and Beck cannot get used to another variety.

Lennart Kollberg is Martin Beck's direct subordinate and his closest confidante. He is considered intelligent and capable, although he is sometimes ridiculed because of his corpulence. Ever since he accidentally shot a comrade as a patrolman, he has categorically rejected the use of firearms. In the course of the series, Kollberg developed into a radical critic of the methods and structures of the Swedish police force; towards the end of the row he leaves the police for this reason.

Gunvald Larsson is first assistant criminal and as such reports to Martin Beck. He originally comes from a wealthy family, but despises the decadent way of life of his relatives, which is why he first hired himself as a marine and sailor and later as a police officer. Because of his often rowdy demeanor and sometimes dubious methods, he is rather unpopular among his colleagues, especially Lennart Kollberg, and only befriended with Einar Rönn.

Fredrik Melander initially works for the homicide squad, but is later transferred to the theft department and takes a back seat towards the end of the series. Melander is considered boring and known to spend much of his duty time on the toilet, but has a very extensive and accurate memory.

The first police assistant Einar Valentino Rönn comes from Norrland and is not considered to be an outstanding, but a competent and careful police officer. He is Gunvald Larsson's only friend on the Reich Murder Commission, but gets along rather poorly with Martin Beck.

Per Månsson is a police officer in Malmö , which, in contrast to the noisy city of Stockholm, is described as calm and largely untouched by social changes. Martin Beck works with him on some cases and the two are also very close personally.

Benny Skacke is an ambitious young police officer who has set himself the goal of becoming the police chief. He initially worked for the Reich Murder Commission, but was temporarily transferred to Per Månsson in Malmö because of an assignment that he was responsible for, which almost failed.

Kvant and Kristiansson are two patrol officers who always go on missions together. Kvant is talkative and impulsive, while Kristiansson is taciturn but constantly borrows money from Kvant for sports betting. Both are Schonen , not particularly servile and repeatedly violate police principles - partly out of laziness, partly due to a lack of awareness of the rules of operation - and thus hinder the investigation, whereby they feel the anger of Gunvald Larsson. They are portrayed by Sjöwall and Wahlöö as exemplary of the incompetence of the police in general, but unlike other police officers, they do not act excessively hostile. Kvant dies in the seventh volume in the series when he is shot by a police officer running amok. Kvant's successor as Kristiansson's partner will be Kenneth Kvastmo.

Overview of the films

The successful Swedish actor was the first to cast the tired commissioner in the film Roseanna , which was made just two years after the book and was later remade with Gösta Ekman. Keve Hjelm had his last role as Karl Wallander in the Mankell film The Fifth Woman .

In 1993 and 1994, six film adaptations of the original novels by the author couple were initially produced. The actors were Gösta Ekman as Commissioner Martin Beck, Kjell Bergqvist as Lennart Kollberg, Rolf Lassgård as Gunvald Larsson and Niklas Hjulström as Benny Skacke. The German actress Corinna Harfouch also played a role in the episode The Death Runs With . Maj Sjöwall made a small appearance in five of the six films .

The German first broadcast of The Man on the Balcony took place in July 1994 on RTL , the remaining films were shown there for the first time in October / November 1995.

In 1997/1998 the Swedish-German co-production of a new series began, which will consist of 34 episodes by 2016. Since the films are not based on the original novels, but only on people and individual motifs from them, the series was initially marketed under the title Kommissar Beck - The New Cases , and only from the second season it was called Kommissar Beck again .

Between 1978 and 1995, all ten novels in the series were each produced once as a radio play on various German public radio stations.

Productions of the HR / SWF

Henning Mankell influenced the series of novels in the elaboration of his eleven-part crime series with the main character Kurt Wallander . Maj Sjöwall said in 2005 as follows: “Henning Mankell is someone who has orientated himself on our characters. He sent me his first book with a dedication; 'Thanks for the inspirations'. ”However, her enthusiasm for the adaptation was limited:“ Mankell's books only describe the state of society. The grievances he points out are so clear that everyone can see them. He also pretends to portray realistically. But he is overbearing, very brutal and writes without humor. "