The 2010 Chess Olympiad was a team tournament in chess that was held in Khanty-Mansiysk from September 20th to October 3rd . It is the 39th  Chess Olympiad of the World Chess Federation FIDE . For the fourth time after 1956, 1994 and 1998 it took place in Russia. During the Olympics, the election of the FIDE President also took place, in which incumbent Kirsan Ilyumschinow prevailed against former world champion Anatoly Karpov . 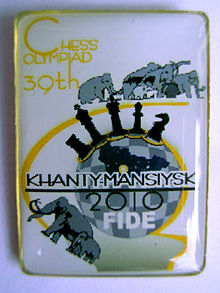 In addition to Chanty-Mansiysk, the cities of Budva , Buenos Aires , Poznań , Riga and Tallinn had applied for the event . The decision on the venue was made at the FIDE Congress in Turin in 2006.

The tournament took place in a tennis hall, which was opened in September 2008, has a total area of ​​15,558 square meters and has a capacity of 3500 spectators. In an interview on July 31, 2010, FIDE President Ilyumschinov expressed concerns that the promised hotels to accommodate the participants could not be completed on time. He warned the provincial governor about this in a letter. There were also problems with the charter flights to Khanty-Mansiysk, the times of which were postponed several times. The organizers finally managed to get all the facilities ready on time.

Host Russia was able to participate with five teams in the open section. Russia 1 in the line-up Vladimir Kramnik , Alexander Grishchuk , Pjotr ​​Swidler , Sergej Karjakin and Vladimir Malachow were number 1 on the seeding list with an Elo average of 2749. A total of 142 federations with 242 Grand Masters and 123 International Masters took part. The main judge was Sava Stoisavljevic from Serbia.

Eleven rounds of the Swiss system were played . For the placement, the team points achieved counted first, then the sum of the Sonneborn-Berger points (team points against an opponent, multiplied by the board points against this opponent, without taking into account the opponent with the fewest team points), then the board points, then the sum of the Team points of the opponents (with the exception of the worst opponent). The time to consider was 90 minutes for 40 moves and 30 minutes for the rest of the game, plus 30 seconds per move from the start. The players had to be at the board at the beginning of the round, otherwise the game was counted as lost. In contrast to the previous Chess Olympiad, draw offers were allowed again at any time.

The German national team had problems meeting the financial demands of the best players in advance. An appeal for donations in June 2010, initiated by Jan Gustafsson and supported by DSB President Robert K. von Weizsäcker , was unsuccessful. On July 13, 2010, Rainer Buhmann , Sebastian Bogner , Falko Bindrich , Martin Krämer and Niclas Huschenbeth were nominated in the open tournament. The team was 42nd on the seed list. In an interview, national coach Uwe Bönsch admitted that there had been problems communicating with the top players, but described their personal attacks against officials as unacceptable. The women's team consisted of Elisabeth Pähtz , Elena Lewuschkina , Melanie Ohme , Sarah Hoolt and Judith Fuchs . It was ranked 16th on the seed list with 110 participating federations.

Due to financial problems, the Romanian team, which with an Elo average of 2633 would have belonged to the wider circle of favorites, canceled their participation at short notice.

In the open section the Ukraine won, led by the towering Vasyl Ivanchuk . Other members of the team were Ruslan Ponomarjow , Pawel Eljanow , Sachar Jefymenko and Oleksandr Mojissejenko as well as team captain Volodymyr Tukmakow . The silver medal went to the favored team Russia 1, the bronze medal went to Israel . The German team only came in 64th, behind Austria (38th) and just ahead of Switzerland (65th).

Gold medals for the best individual result went to Vasyl Ivanchuk (Board 1, Ukraine), Emil Sutovsky (Board 2, Israel), Vitali Teterew (Board 3, Belarus), Sergei Karjakin (Board 4, Russia) and Sébastien Feller (Board 5, France ).

Sutovsky achieved the best rating of all participants with 2895. Akram Wasim , who played for Pakistan on board 3, achieved the highest rating with 84 points.

A total of 3240 games were played (1209 white victories, 1031 draws, 985 black victories, 15 without a fight). The participating countries included four newcomers, all of whom came from Africa: Burundi, Cameroon, Sierra Leone and São Tomé and Príncipe.

In the women's category, the Russia 1 team won, whose tournament victory was already clear before the last round. China took 2nd place , Georgia came 3rd . Germany came in 25th, Switzerland in 52nd place and Austria in 55th place. Very detailed information on women is available on the Wiener Zeitung website.

Russia also won the Gaprindashvili Cup, for the best combined result in the Open Section and the Women's Section, ahead of China and Ukraine.