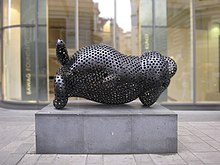 Sir Tony Cragg , actually Anthony Douglas Cragg (born April 9, 1949 in Liverpool ) is an English visual artist. Until the end of July 2013, Cragg was rector of the Düsseldorf Art Academy .

Tony Cragg, the son of an aeronautical engineer, first worked as an intern at a biochemical research company after graduating from high school before turning to art. He began his studies at Gloucestershire College of Art and Design , then attended the painting class of the then Wimbledon School of Art , before moving to the Royal College of Art in London in 1973 .

During his studies, Tony Cragg's interest shifted from painting to plastic; For example, he stretched nets of knotted cord over everyday objects. His acquaintance with the conceptual artist Richard Long influenced his work during this period. On his “exploratory trips” through the great outdoors and on landfills , Tony Cragg collected objects that served him as material and as inspiration for new work: “Civilization waste meets natural materials”.

In 1976 he accepted a teaching position at the École des Beaux-Arts in Metz . A year later he moved to Wuppertal , where he still lives today. He lived completely withdrawn for two years, only to return to the art scene in 1979 with the work “New Stones, Newton's Tones” - a mosaic of brightly colored, color-coded plastic pieces spread out on the floor .

In the 1980s Cragg was represented at many important international exhibitions. For example at documenta 7 and documenta 8 in Kassel and at five biennials in Venice , São Paulo and Sydney . In the mid-1980s, another turning point in Tony Cragg's work became apparent: objects from his plastic era were replaced by expansive bronze sculptures . In 1988 he received the British Art Prize Turner Prize . Tony Cragg has also devoted himself to drawing since the late 1980s .

From 1979 he taught at the Kunstakademie Düsseldorf, since 1988 as a professor, in 2001 he started as a professor for sculpture at the University of the Arts in Berlin . Since 1994 he has been a member of the Royal Academy of Arts in London and since 2002 a member of the Academy of Arts in Berlin. He was also promoted to Commander of the British Empire (CBE) that same year . He was Vice Rector and since 2009 Rector of the Düsseldorf Art Academy; in this function he followed Markus Lüpertz . On August 1, 2013, he gave the office to Rita McBride . At the beginning of February 2015 he was made an honorary member of the Art Academy.

In 2009 Anthony Cragg was elected to the North Rhine-Westphalian Academy of Sciences and Arts .

Cragg's first outdoor works include the Early Forms from 1990 in front of the Von der Heydt Museum in Wuppertal and the Plastic Spine from 1996 next to the Viersen district administration .

Several dancing columns were created in the 2000s and Versus was created in 2011 .

In August 2013, Tony Cragg's first memorial was erected in front of the historic main zoo building in Wuppertal . The sculpture is called Domagk and commemorates the invention of the first usable antibiotic , for which Gerhard Domagk received the Nobel Prize in Medicine . In June 2014 was in the pedestrian area of Bonn , the six-meter-high bronze sculpture downtown Mean Average (dt .: Mean average ) in the presence of the artist, the Bonn Mayor Jürgen Nimptsch and Alt-Chancellor Gerhard Schröder unveiled.

On June 30, 2020, the extension of the Marie-Elisabeth-Lüders-Haus in Berlin with a 6 m high sculpture by Tony Cragg towards Luisenstrasse was completed. 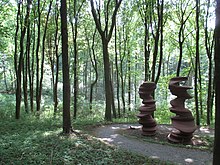 In 2006 the sculptor acquired a 15 hectare overgrown park in Wuppertal with the listed Villa Waldfrieden , the former residence of Kurt Herberts , in order to build the Sculpture Park Waldfrieden here . In order to be able to devote himself to the project, he gave up his professorship at the University of the Arts in Berlin (UdK) and switched to the Düsseldorf Art Academy. The sculpture park was opened in September 2008 . It shows works by Tony Cragg and other international sculptors as well as changing special exhibitions.