Augusta is located on the Kennebec River , which flows north-south through the area of ​​the City, in central Kennebec County. In the east of the area there are several larger lakes, such as the Togus Pond , the Little Togus Pond , the Threecornered Pond and others. The surface is flat, without any significant elevations.

All distances are given as straight lines between the official coordinates of the places from the 2010 census.

The mean average temperature in Augusta ranges from −6.1 ° C (21 ° Fahrenheit ) in January to 20.6 ° C (69 ° Fahrenheit) in July. This means that the place is around 6 degrees cooler than the long-term average in the USA. The snowfalls between October and May are up to two and a half meters, more than twice as high as the average snow depth in the USA; the daily sunshine duration is at the lower end of the range in the USA.

The area of ​​the present city has been explored by European settlers since 1607. They were based in the settlement known as Sagadahoc or Popham Colony , which existed only for a short time . The first settlers in the area came from the Plymouth Colony . They set up a trading post on the Kennebec River around 1628, for the trade of agricultural products for furs with the Indians living here. The trading post was abandoned between 1669 and 1676.

In addition to the English, there were also French influences in the 17th and 18th centuries. The Jesuit Father Gabriel Dreuillettes visited the area in 1646 and set up a mission for the Kennebec Indians. At this time the name Cushnoc ( Coussinoc or Kouissnoc ) was coined for the Plymouth Colony trading post.

Fort Western was built in 1754 during the Seven Years War in North America in Augusta, near the former trading post, to protect the first settlers. During the American Revolutionary War , Benedict Arnold and his troops traveled through Fort West on their way to Quebeck. The fort lay below the falls and also served as a supply depot for Fort Halifax. After the end of the war, Captain James Howard, the former commander of the fort, remained as the first permanent settler and used the main building of the fort as a residence and business.

Augusta became the Shire Town of Kennebec County in 1799 and in 1827 Augusta was named the capital of Maine, which in 1820 became the 23rd state to join the Union. The first session of the Maine government was held in Augusta in 1832. Augusta was organized as a city on August 20, 1849. 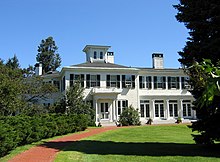 Four Augusta locations have National Historic Landmark status , including the James G. Blaine House , which serves as the governor's residence , and the Kennebec Arsenal . 42 buildings and sites in the city are listed on the National Register of Historic Places (NRHP) (as of November 5, 2018).

The City Council consists of eight members, one member each representing one of the four districts of the city and four other members. You have a three-year term and can only serve in that position for three consecutive terms.

Mayor of Augusta is David Rollins. He took up his post on November 6, 2014. Rollins was born in Augusta and was a member of the City Council before he was elected mayor.

Another museum is the Children's Discovery Museum which has exhibits and activities that promote children's developmental skills, including social, cognitive, problem-solving, and peer interaction.

The Maine Military Historical Society Museum is a military and aviation museum located in Augusta.

→ Main article : List of entries on the National Register of Historic Places in Augusta, Maine

A number of districts and buildings in Augusta have been listed and listed on the National Register of Historic Places.

The botanical garden Viles Arboretum , formerly also called Pine Tree State Arboretum , with an area of ​​90.6  hectares is worth seeing .

The paper, steel, food and computer industries are based in Augusta.

Augusta State Airport is located to the west of Augusta, close to the interstate. He bears the IATA code AUG.

Augusta is connected to the freight network through the Maine Eastern Railroad .

The Kennebec Journal is the daily newspaper for Augusta and the surrounding area.

Several radio stations are located in Augusta, and the television station WCBB channel 10 is the local broadcaster of the Maine Public Broadcasting Network.

There are several medical facilities and hospitals in Augusta that are also available to residents of the neighboring towns.

Three public libraries are located in Augusta, the Maine State Library on State House Station, the Lithgow Library on Winthrop Street, and the University of Maine Library at Augusta.

The Augusta School Department is responsible for school education in Augusta.

The following schools are located in Augusta:

The University of Maine at Augusta is located in Augusta .