Hamm-Uentrop has been a district of the city ​​of Hamm in Westphalia since 1975 . The formerly independent municipality of Uentrop forms the core of the new district and was the inspiration behind the name.

Uentrop is limited by the municipality of Lippetal in the east, the districts of Hamm-Rhynern in the south, Hamm-Mitte in the west, and Hamm-Heessen in the northwest and the city of Ahlen in the north. The western boundary of the district is formed by the course of the Ahse in the urban area of ​​Hamm. The Lippe flows through the northern part of the city district from east to west.

The community of Uentrop is mentioned for the first time in 1030 when the bishops of Münster founded a parish. In 1202 the place was donated from Marienfeld Monastery to Count Friederich von Altena. As a result, there were protracted disputes over sovereignty over the parish of Uentrop (with hair and feasts). These were only settled by the border treaty of 1575 between the County of Mark and the Duchy of Münster . The sovereignty then remained with the County of Mark. Uentrop was assigned to the office of Hamm and, like the entire county, passed to the Electorate of Brandenburg after the family of the Counts of the Mark had expired in the main line in 1609. This condition was finally confirmed in 1666 by a comparison of inheritance between Pfalz-Neuburg and Brandenburg. In 1716 Uentrop formed its own office in the Kingdom of Prussia that had just been established, but fell back to the Mairie (mayor's office) of Hamm during the Napoleonic occupation, which had replaced the office of Hamm during the Napoleonic era.

In 1965, the Du Pont de Nemours concern began building a factory for the production of Dacron and nylon , for which a factory harbor was laid. The plant went into operation in 1968.

On January 1, 1968, the formerly independent communities Braam-Ostwennemar (largely), Frielinghausen, Haaren, Norddinker, Schmehausen, Vöckinghausen and Werries were incorporated. The reason was the law on the reorganization of the Unna district of December 19, 1967.

With the municipal area reform, which came into force on January 1, 1975, the municipality of Uentrop, with 12,238 inhabitants on 39.46 km², united with the city of Hamm in addition to other towns and cities. The city district newly formed in the same year in the east of the newly created city of Hamm was named Hamm-Uentrop.

→ Main article : Results of the elections for the district representation in the Hamm-Uentrop district

Split by gold and red: in front a red bar covered with three silver stakes; behind a gold-wrapped silver spindle over a golden lightning bolt.

The first field quotes the coat of arms of the Herren von der Recke (“in blue a silver bar covered with three red stakes”), who had large estates in Uentrop in the Middle Ages, and the colors of the county of Mark (“in gold, a red-silver slaughtered Bar"). The spindle stands for the textile industry and the lightning bolt as a symbol for the energy industry.

This coat of arms was approved by the state of North Rhine-Westphalia in 1969. 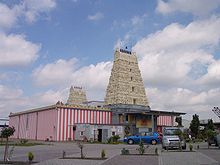 Sights include the Uentrop moated castle and Maximilianpark . The park's landmark is the largest glass elephant in the world. On the occasion of the first state horticultural show in North Rhine-Westphalia, it was placed on a former colliery building of the Maximilian colliery . Today it serves exhibitions and other events.

The Protestant parish church of St. Pankratius in the Mark district is almost 1,000 years old and still has important medieval portraits in the choir room. It was Hamm's mother church until 1337 . Here you can also find the grave of Lieutenant General Karl Friedrich von Wolffersdorff (1716–1781) and in the vicinity of the castle hill Mark , which still shows the dimensions of the former ancestral castle of the Counts von der Mark . Also worth seeing is the evangelical village church in the village of Uentrop, built in the Middle Ages, with its paintings. The tower dates from the 13th century, while the nave was built in the 16th century. The bell is the only one that has survived in the original.

Also in the area of ​​the city district is Europe's largest Tamil-Hindu temple, the Sri Kamadchi Ampal Temple . The Hamm Kurpark together with the surrounding residential areas, the Kurhaus, form the Bad Hamm district . The park of the former spa facilities is one of the largest public Hammer Parks and a strongly defining element of the city.

The floodplains of the river Lippe are mainly used for nature conservation.

There are extensive local recreation areas in the Ahse area and cycling and hiking trails lead along the Datteln-Hamm Canal. Further expansion of the former Haaren coal port and Haarener Baggersee for recreational purposes are planned. The spa gardens and the park around the castle hill Mark offer further possibilities for those seeking relaxation. In addition there are the numerous still rural areas of the urban district.

View of the cooling tower of the Westphalia power plant

The district also has the following schools:

Uentrop is one of the largest industrial locations in Hamm, major employers are:

Uentrop is connected to the A2 and the German trunk road network via the Hamm-Uentrop junction, which is located in Lippetal - Lippborg .

The canal end port of the Datteln-Hamm Canal connects the city district to the European waterway network.

The urban district of Uentrop is integrated into the public transport system by the Hamm city ​​bus network.

A previously existing regular railway connection by the AG Ruhr-Lippe-Eisenbahnen from Lippborg to Hamm Süd and Hamm Stadt was discontinued. Today the line is partially used by the Hamm museum railway as a home line.

Districts of Hamm (with districts)