Holtershausen is a small village and a locality of the city of Einbeck in the district of Northeim , has the smallest Feldmark in the city of Einbeck and today has only about 65 inhabitants in 17 houses. The place name is derived from the first document Haholdeshusen .

Holtershausen is located - between Hanover and Göttingen - in the Leinebergland between the mountain ranges of Selter in the north, Hube in the south and Hils in the west and has a connection to the federal highways B 3 and B 64 . The small village is located in a small valley on the slope (Lietberg) of the Hube ridge at about 230  m above sea level. NN . 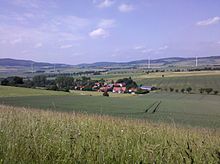 A Saxon noble farm Haholdeshusen is said to have existed here as early as the 8th century, which was previously mistaken for the origin of Bad Arolsen . On June 29, 1148, Haholdeshusen appears again in a document from the Gandersheimer Stift , when Count Hermann II. Von Winzenburg 14 Hufen Land u. a. in Haholdeshusen and Brunessen ( Brunsen ) for the Schildberg Castle near Seesen . A Hahold de Ruden and Hahold de Burnham are listed as witnesses in this document . The village is thus used to be a foundation or owned by the Haholde been his (housing a Hahold) .

Not far from Holtershausen in the parcel "In der Mönchelieth" there was once a farm yard ( Grangie ) of the Cistercian monastery Amelungsborn , which was known as the so-called Abtshof . The origin of this abbot farm can be found in the village or the desert of Winenvelde , which came into the possession of the monastery through so-called peasant laying . In 1385 monks of the Augustinian monastery in Einbeck bought two Hufe of land at the Sattelhof and Steinwerk in Holtershausen, of which only remnants still exist today. On August 24, 1421, the Augustinian monks received the abbot farm near Holtershausen as a fief from Hans von Minnigerode (with princely consensus from Duke Erich von Grubenhagen ) and received it from him in 1436. There is evidence that the village of Holtershausen was sold piece by piece to the Augustinian monastery in Einbeck in the following decades, and in 1508 it also came into its entirety. Field names like monks Lieth, Monk width and Mönchenholzhausen still bear witness to this past.

In 1543 there was an extensive legal dispute between Duke Philipp I and Burchard von Salder over the village of Holtershausen and the former Abtshof and its accessories.

Until 1959 the place consisted of only 7 houses and in the past few decades it has expanded by another 10 houses and a village community center . An Aussiedlerhof belongs to the village .

Holtershausen was the second smallest independent municipality in the Duchy of Braunschweig .

Until 1974, Holtershausen in the Gandersheim district retained this independence; only on the occasion of the municipal area reform was the place incorporated into the city of Einbeck on March 1, 1974 and now also belonged to the district of Northeim .

Oldest known town view on a postcard from 1911

The village of Holtershausen in 1918 (complete view)

First color view of town on a colored postcard around 1925

The local mayor is Gerhard Mika (WG). The local representative is Marco Strohmeier. (As of Nov 2016) .

Blazon : In the divided shield above in blue three silver monks next to each other, below in gold a blue three-mountain raised almost to the center of the shield, covered with a silver draw well made of field stones including a bucket that grows from the base of the shield.

The coat of arms, which was introduced in 2000, indicates the former influence of the Augustinian monks, whose work in Holtershausen can be documented from 1385 to 1537. The mountain, here designed as a three-mountain for graphic reasons, is the common symbol of the villages “Auf dem Berge” . The tinging was chosen to indicate the former affiliation to the Duchy of Braunschweig . The draw well is reminiscent of a medieval well rediscovered in 1991 during sewer construction work in the middle of the village street, which was found in a completely intact condition.

The so-called Mönchelieth begins on the Lietberg (up to 287.7 m) above Holtershausen . Their original size can be found in the Greener Heritage Register from 1548, which says:

" Monnichelait. It goes on after the sun rises ... and belongs to the Greene house up to the Garlebsche Feld and the Einbecker Landwehr, ... it extends ... the Holdershausischer Acker down to Braunsen down to the Einbecksche Heerstrasse and after noon it stretches up to the Einbecksche Wendfeld and has young oaks and beeches and is a young mast wood…. The prince has sovereignty in all the trees, he also owns the hunt . "

Today a display reminds of the history of the village and the importance of the Mönchelieth (see section History ) in earlier times. The space adorned by a large wooden cross is regularly used for church services. From Lietberg you have a nice overview of the area.

Remains of a historical stone work

In the center of the village there are the remains of a historical stone work , which can be documented in 1385. Today only large stone blocks and remains of walls bear witness to this former stone structure that shaped the townscape many centuries ago. An information board attached there reminds of this stone work and explains its former function.

Information board on the remains of a stone work

Between Holtershausen and Greene , in the Greener Forest, there is the so-called Hirschsprung memorial stone , which refers to a special event during a ducal hunt in 1606.

A legend connects Holtershausen with the district town of Hameln in the Weserbergland . In the book Lower Saxon Legends and Fairy Tales by Georg Schambach and Wilhelm Konrad Hermann Müller , published in 1854, a report is made about a farmer from Holtershausen, whom a dream leads to the Hamelin Bridge and thus helps to a treasure on the Mönchelieth. The interesting thing about this legend is that a real core can be documented in 1793.

Districts of the city of Einbeck