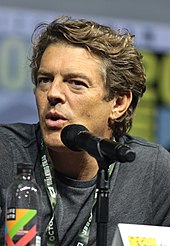 Jason Ferus Blum (born February 20, 1969 in Los Angeles , California ) is an American film producer . He is the founder and CEO of the film production company Blumhouse Productions .

Jason Blum is the only child of art professor Shirley N. Blum and art dealer Irving Blum. His mother was previously married to the museum director Walter Hopps . He grew up in New York City.

Blum graduated from Vassar College . During his studies he met Noah Baumbach , with whom he made his first short films. After completing their studies in 1991, Blum and Baumbach moved to Chicago, where they shared an apartment. When Baumbach made his first feature film Kicking and Screaming , Blum was the executive producer.

After an argument with Baumbach, Blum moved to New York City, where he worked as a real estate agent. Shortly afterwards he met Ethan Hawke , who hired Blum as the producing director for his Malaparte Theater Company . Although intended as a nonprofit company, Malaparte made a profit through Blum's involvement.

Blum then worked initially as Vice President of Acquisitions at Arrow Films and later as Co-President of Acquisitions at Miramax Films under Bob and Harvey Weinstein . At the 1999 Sundance Film Festival, Blum acquired the next hit independent comedy Happy, Texas for $ 10.2 million . However, the film flopped and grossed just $ 1.9 million, making Miramax a significant loss. At Sundance, Blum had also turned down a purchase of the $ 60,000 horror film Blair Witch Project . Instead, Artisan Entertainment acquired the rights for $ 1.1 million. The film grossed over $ 248 million. Shortly afterwards, Blum quit Miramax.

He moved to Los Angeles and worked there as a freelance producer for Warner Brothers . In 2000, Blum founded his production company Blumhouse Productions . Other projects, which he offered to Paramount Pictures , among others , did not receive approval for a theatrical release.

Then Blum saw the horror film Paranormal Activity , which was produced for only $ 15,000. The film reminded him of the Blair Witch Project . Blum offered the film to various studios in two years. It wasn't until 2007 that he was able to publish the film on Paramount. On the opening weekend, the film grossed US $ 20 million, which corresponds to an average income of around US $ 25,000 per cinema. Overall, the film grossed almost 200 million US dollars worldwide, making it the most profitable film to date as of 2015. The film was followed by several sequels.

Then Blumhouse Productions specialized in the production of low-cost genre productions. Many of these so-called micro-budget films earned several times their production costs, which makes them highly profitable. Blum produces most of his films for an average of 4.5 million US dollars. As long as a film stays below these costs, according to Blum, it will also bring in its money if “everything goes wrong” (“The model is, really, if everything goes wrong, we will recoup.”). In return, Blum waives his own advance payment as a producer and only pays the actors and staff the minimum wages agreed by the union. However, if the film works at the box office, Blum takes 12.5% ​​of every dollar earned and shares the rest with the main cast and the staff. In return, he assures the filmmakers the greatest possible creative freedom: the scripts are no longer revised by the studio and the director receives a guarantee for the final cut . In order to keep costs down, however, directors are instructed to limit the number of speaking roles and, if possible, only film at one location . The costs are also kept low by the fact that post-production is not outsourced as is usual, but is taken over directly by Blumhouse employees.

With this recipe for success, films produced by Blumhouse have already grossed over 4 billion US dollars at box offices around the world as of 2018.

In 2014 he was involved as a producer on Whiplash and was nominated for an Oscar in the category Best Film . His involvement in the television film The Normal Heart earned him an Emmy in the same year and the Stanley Kramer Award at the Producers Guild of America Awards in 2015 . At the 2018 Academy Awards , Blum was nominated for Get Out in the Best Picture category together with Sean McKittrick , Edward H. Hamm Jr. and Jordan Peele .

Blum has been married to journalist and screenwriter Lauren AE Schuker Blum since July 14, 2012. Their daughter was born in April 2015.