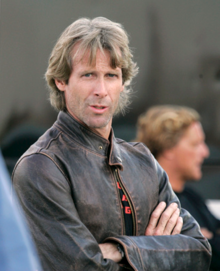 Michael Bay, like his younger sister, grew up in the Westwood District of Los Angeles as the adopted child of a child psychologist and accountant. At the age of 20 he met his birth mother, and his father is said to have come from the film industry. Bay reports that his mother named John Frankenheimer as his father, but who denies paternity.

Bay completed his education at Wesleyan University in Connecticut . After being rejected from a prestigious film degree, he studied at Pasadena's Art Center College of Design . Michael Bay began his career in the movie business in 1984 after making a pastiche on a Coke advertisement. He first made a name for himself as a director of music videos for artists such as Aerosmith , Tina Turner , Meat Loaf and the Divinyls and was nominated for several MTV awards. In the advertising industry, he staged multiple award-winning clips, including for well-known automotive companies, Californian milk and Levi's .

Jerry Bruckheimer and Don Simpson brought Bay into the film business in the mid-1990s for the film Bad Boys . The action film starring Will Smith and Martin Lawrence was a huge box-office success and marked the breakthrough in Smith's career. Bruckheimer and Bay remained a team in other films such as The Rock - Rock of Decision (1996), Armageddon (1998) or Pearl Harbor (2001), only The Island (2005) was shot by Bay without his participation.

Bay was also planned for the live adaptation of the computer game series Prince of Persia , which was released in German cinemas in May 2010. This post was taken over by Mike Newell due to lack of time .

The early Bay films in particular often meet with rejection from film critics , especially because of Bay's origins as a director of commercials and music videos. They would neglect the plot, expose the viewer to more visual and acoustic stimuli and focus too much on action sequences. The film The Rock can be listed here as an example . The lexicon of international film certified the film as having “uniform material battles” and “calculating video clip aesthetics”, while Thomas Groh from the Filmzentrale criticized “the most vulgar scientific blah”, a “lurid story” and “two-dimensional figures”.

Jeanine Basinger is a professor of film studies at Wesleyan University , whom Bay met at the age of 18. She wrote an essay on Bay and his film Armageddon , which characterizes the early films of Bay ( Pearl Harbor , Armageddon , The Rock ).

“Armageddon is a perfect example of how Bay tells his stories with the motto 'no prisoners'. In this way he shows confidence in his audience to reason things for themselves. One of his strengths is a maximum of flawless representations, which overlay the inevitable pseudoscience behind the films. Yes, the viewer has to process a lot. Yes, it changes quickly from place to place, person to person and event to event. But it's never confusing, never boring, and nothing less than a brilliant mix of what films are supposed to do: tell a good story, describe characters through active events, evoke an emotional response from the audience, and entertain simply and directly without great pretense. "

Bay was for the movies Armageddon and Pearl Harbor for the Golden Raspberry as Schlechinger tester director nominated and saw the allegations initially left:

“I make films for teenage boys. Oh dear, what a crime. "