The title of this article is ambiguous. For the island of the same name in Antarctica, see Murray Island . 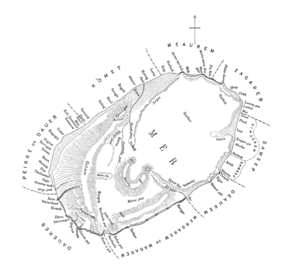 Map of Murray Island ( Mer ) with traditional districts and villages

Murray Island , called Mer by the locals , is the easternmost inhabited island in the Torres Strait Archipelago . With the uninhabited islands of Dowar Island ( Dauar ) and Wyer Island ( Waier ), 2 kilometers to the south-west, it forms the group of the Murray Islands .

Administratively, the island belongs to the Eastern Islands , the easternmost island region in the Torres Shire administrative district of Queensland ( Australia ). The island is divided into the tribes Komet, Zagareb, Meuram, Magaram, Geuram, Peibre, Meriam-Samsep, Piadram and Duration Meriam. The tribal area of ​​the Meuram (Meaurem) in the north of Murray Island also includes the islands of Darnley Island and Stephens Island as well as the uninhabited islands north and east of them, up to Bramble Cay .

One of the most famous residents of Murray Island was Eddie Mabo (1936-1992), who was born here and who campaigned intensively in court for the land ownership rights of the Torres Strait Islanders on Murray Island and was awarded a land title by the highest Australian court. This success was of great importance for the land rights of the Aborigines as well .