Piecki [ ˈpjɛt͡ski ] ( German whip village) is a village in the powiat Mrągowski of the Warmian-Masurian Voivodeship in Poland . It is the seat of the rural community of the same name with 7581 inhabitants (as of June 30, 2019).

Piecki is located in the Masurian Lake District south of Lake Wągiel (Great Wongel Lake) , about 56 kilometers east of the city of Olsztyn (Allenstein) . Near the village of River rises Dajna (your) . 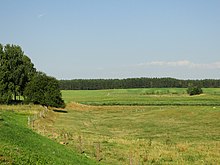 Houses on the outskirts of Piecki

The place Peitschendorf was founded in 1401 by Ulrich von Jungingen .

On April 8, 1874, it became an official village and thus gave its name to an administrative district that existed until 1945 and belonged to the Sensburg district in the Gumbinnen district (from 1905 Allenstein district ) in the Prussian province of East Prussia .

Due to the provisions of the Versailles Treaty , the population in the Allenstein voting area , to which Peitschendorf belonged, voted on July 11, 1920 on whether they would continue to belong to East Prussia (and thus to Germany) or join Poland. In Peitschendorf, 720 residents voted to remain with East Prussia, while Poland received no votes.

Towards the end of the Second World War , the Red Army occupied the region in the spring of 1945 . Soon after, Peitschendorf was placed under Polish administration together with the southern half of East Prussia . Unless the inhabitants had fled, they were subsequently expelled and replaced by Poles. Peitschendorf received the Polish form of the name Piecki .

In 1401 the Grand Master of the Teutonic Order Ulrich von Jungingen assigned 45 Hufen Land to the Petzym von Muschkake for the construction of a settlement. The name of the village developed from Petzym , which was still called Petzendorf in the 15th century and Pieczken before 1785 , then Peitschendorf until 1945 and since then Piecki .

Originally seven places belonged to the district of Peitschendorf; in the end there were five due to structural changes:

The parish of Aweyden ( Nawiady in Polish ), in which whip village was parish, existed since about 1437 . At the turn of the 19th / 20th In the twentieth century, the region had grown in terms of population so that church work in the parish could no longer be managed. Peitschendorf itself had grown to 1,039 inhabitants in 1905, of which 1,008 were Protestant. Special auxiliary preachers were used for Peitschendorf, but they remained subordinate to the parish in Aweyden. The services and events took place in the town hall. 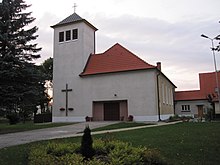 The church from 1934 in Piecki / Peitschendorf - Protestant until 1945, since then Catholic church

In 1934, a specially built church in Peitschendorf was consecrated and at the same time an independent parish was established, which, however, remained parochial connected with Aweyden. A similar project for the parish of Langendorf ( Dłużec in Polish ) could not be realized until 1945.

Parish Peitschendorf belonged to the parish of Sensburg in the church province of East Prussia of the Evangelical Church of the Old Prussian Union until 1945 .

Due to the flight and expulsion of the local population , after 1945 the church life of the Protestant community in the whip village, now known as “Piecki”, came to a standstill. The living here today evangelical church members now belong to the parish church of St. Trinity Mrągowo in the diocese Mazury the Evangelical Augsburg Church in Poland , which in Nawiady a filial community maintains.

The parish of Peitschendorf was assigned as parish locations until 1945:

The pastors in Peitschendorf officiated as auxiliary preachers:

The few Catholics in Peitschendorf (1905 of the 1,039 inhabitants 31 of the Catholic denomination) were incorporated into the St. Adalbert Church in Sensburg (Polish: Mrągowo ) in what was then the Diocese of Warmia until 1945 . After 1945 many new Polish citizens settled here, almost all of whom belonged to the Catholic Church. On July 6, 1946, they used the previously evangelical church. In the following years it was restored and adapted to the liturgical changes. Today it is a parish church called Kościół Matki Bożej Różańcowej (“Church of Our Lady of the Rosary”). The parish is assigned to the deanery Mrągowo I in the current Archdiocese of Warmia .

The rural community (gmina wiejska) Piecki with an area of ​​314.6 km² includes the village itself and 23 other villages with school administration offices (sołectwa). On June 26, 1996, a new municipal coat of arms was introduced in Piecki. 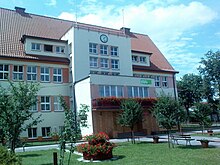 Around 1740 Peitschendorf received a school.

The village Piecki is located on the national road 59 , which runs in a north-south direction from Giżycko (Lötzen) to Rozogi (Friedrichshof) . In Piecki of ending Ruciane-Nida (Rudczanny / Niedersee - Nieden) about Ukta (Alt Ukta) coming provincial road 610 . Between 1898 and 1945 Peitschendorf was a train station on the Sensburg – Rudczanny / Niedersee railway line , which was closed due to the war.

Native of the place

Connected to the place