The title of this article is ambiguous. Further meanings are listed under Pionerski (disambiguation) .

Pionerski ( Russian Пионерский ; German until 1947 Neukuhren; Lithuanian Kuršiai ) is a town with 11,016 inhabitants (as of October 14, 2010) in the Russian Oblast of Kaliningrad . The city forms its own urban district .

Pionerski is located on the Baltic Sea on the Samland peninsula , between the seaside resorts of Zelenogradsk (Cranz) and Swetlogorsk (Rauschen) about 35 kilometers north of the oblast capital of Kaliningrad (Königsberg) .

The village of Neukuhren has been known since 1254. Towards the end of the 19th century it developed into one of the seaside resorts on the north coast of the Samland peninsula, but was overshadowed by the neighboring Cranz and Rauschen.

On June 13, 1874, Neukuhren became the district village and gave its name to a newly established district . It belonged to the district of Fischhausen , from 1939 to 1945 to the district of Samland in the administrative district of Königsberg in the Prussian province of East Prussia . On September 30, 1928, the neighboring manor district Wangenkrug on the Baltic Sea was incorporated into the rural community of Neukuhren.

During the Second World War , units of the Wehrmacht were stationed in Neukuhren : the Neukuhren Air Force Field Regiment, the Aviation Training Regiment 10 and the A 125 and A / B 125 pilot training schools.

After the war, the place came to the Soviet Kaliningrad Oblast, received on June 17, 1947 the status of a spa settlement within the Primorsk Raion and was renamed Pionersky at the same time; Derived from Russian pioner for pioneer , a member of the pioneer organization “W. I. Lenin ” . On December 26, 1952, the settlement received city rights. After the dissolution of the city Rajons Primorsk Pionerski was the City Soviet of the February 1, 1963 Selenogradsk assumed. On January 12, 1965, Pionersky was incorporated into the so-called Svetlogorsk spa-industrial zone, which was administered from Svetlogorsk . On March 22, 1993, Pionerski was spun off from this association and designated a town with oblast significance. On March 31, 2004, the city received the status of a city district as a municipal self-government unit. In 2011, a residence for the President of the Russian Federation was completed in Pionersky.

After Neukuhren and Pionerski, the following three places were incorporated:

Mayor / Chairwoman of the City District (since 1992) 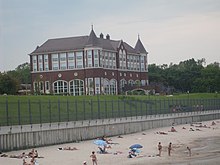 Residence of the President of the Russian Federation

Heads of administration of the city district

Between 1874 and 1945 Neukuhren was the seat of the administrative district of the same name , which initially included 13 rural communities or manor districts :

Neukuhren already had a spa house in the 1890s, which was counted among the most beautiful buildings in Samland. Pionerski is still a seaside resort and an important fishing port today.

The Elektritschka runs to Kaliningrad Severny train station and to the neighboring towns of Svetlogorsk and Zelenogradsk. The city's train station is called Pionerski Kurort .

Neukuhren did not have its own Protestant church before 1945, but was part of the parish of the parish church in Sankt Lorenz (today in Russian: Salskoje). This was incorporated into the parish of Fischhausen (Primorsk) in the church province of East Prussia of the Church of the Old Prussian Union . Today Pionerski is located in the catchment area of ​​the newly established Evangelical Lutheran congregation in Zelenogradsk (Cranz) , a branch congregation of the Resurrection Church in Kaliningrad (Königsberg) , belonging to the Kaliningrad provost of the Evangelical Lutheran Church of European Russia .

Before 1945 there was a Roman Catholic church made of brick in Neukuhren .

Since 2013 there has been a Russian Orthodox church in Pionerski , which is dedicated to the icon of Our Lady of Tikhvin .

Administrative division of the Kaliningrad Oblast