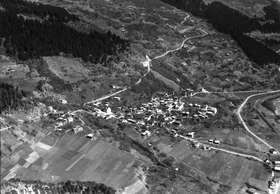 Blazon : In red the golden (yellow) Portrait of Saint Andrew (Apostle) with silver Nimbus , in front of a natural-colored Andreaskreuz reserved

The coat of arms of St. Andrew was used by the former community on a flag as well as in a seal . It refers to the historical relationship between the Ruis parish and the Disentis monastery . Since the municipal merger, it has only had a historical character, as Rueun, like the neighboring incorporated neighborhoods, today use the Ilanz / Glion emblem.

The territory of today's Ilanzer neighborhood Rueun includes areas left and right of the front Rhine . On the right-hand side there is an unpopulated forest area and along the Vorderrhein the important floodplain reserve Ogna da Pardiala , in which not only rare plants but also threatened and endangered animal species live. On the left bank, the village stretches from the valley floor (San Clau, 739 m above sea level) up to Fil da Rueun (2351 m). The village itself lies on a terrace slightly above the valley floor, which is dominated by the Vorderrhein. Above and north of the village there are numerous mountain pastures that were previously used seasonally and intensively in traditional Alpine farming, some of which are used for tourism. Of the entire former municipal area of ​​1158 hectares, 533 can be used for agriculture. 506 hectares are covered by forest and wood. The remaining municipal area comprises 68 ha of unproductive area (mountains) and 51 ha of settlement area. A large part of the population lives from agriculture, tourism, small businesses and jobs in the regional center of Ilanz.

From the late Middle Ages to the end of the 19th century there was a modest mining industry, copper ore was mined in modest quantities in the Val Schmuer, on the Alp Renasca and in Sul Rhein. In 1588 there were already five pits. The mines are no longer used today, and they would like to be made accessible again for tourism purposes, as in neighboring Obersaxen. In earlier times, Rueun had a certain importance as a pass point and as a transit point on the Lukmanier pass route. During the Napoleonic era, the village and the entire region were severely damaged in 1799 by the passing troops of General Alexander Suworow , who had crossed the Panixer Pass under great strain. Significant secular buildings are the Upper House Deflorin (built in 1610) and the Casa alva (built in 1662 by Simeon Deflorin), two stately town houses.

From Rueun, a mountain road leads to the reservoir and the mountain community of Pigniu as well as via narrow side roads to Siat and Andiast . Rueun had a favorable warm climate in earlier epochs, as a find of a post-glacial oak stalk (today in the Chur Nature Museum) documents the change in climate and vegetation well. Since the catastrophic floods in the Surselva in 1987 and 2002 with extreme reefs and debris flows, the village of Rueun has been shielded from the torrents by protective walls. Thanks to its mild climate, it has evolved as a popular place to live not far from Ilanz / Glion.

The Punt da Rueun has spanned the Vorderrhein near the train station since 1840 . It leads to the right side of the river to the Polenweg , which is so called from Ilanz to Tavanasa . It was built between 1940 and 1945 by interned, mostly Polish soldiers. Commemorative plaques and a wayside shrine at the western end of Plaungrond remind of this. The unpaved field path runs along the Vorderrhein and is a popular hiking and biking route along the Rhine from Disentis to Ilanz / Glion.

The only village church is the Catholic Church of St. Andrew, first mentioned in 840. There are also four chapels in Rueun: St. Nicholas below the village, St. Franziskus and St. Antonius von Padua both on the road to Pigniu and St. Maria Magdalena at the eastern end of the village before Schnaus .

The Graubünden actress and singer Corin Curschellas lives in Rueun .

Political communities in the Surselva region