This article covers the city. For further meanings see Časlav .

The main square of Čáslav

View of Čáslav in the 18th century, in the foreground Žižka's grave

Čáslav (German Tschaslau , Czaslau or Caßlau ) is a town in the Okres Kutná Hora in the Central Bohemia region ( Středočeský kraj ) in the Czech Republic .

The city became a royal city ​​around 1260 and was a Hussite headquarters in the 15th century . Here in 1421 the ruling King Sigismund was deposed as the Bohemian king in the Peter and Paul Church and declared an undesirable person. According to tradition, Jan Žižka is said to have found his final resting place in the same church in 1424 . Part of a skull attributed to him is on display in the town hall.

In Čáslav during the recatholicization in Bohemia, among others, Matthäus Ulicky worked as a deacon, who was later executed as a Protestant martyr. On May 17, 1742, the Battle of Chotusitz between Prussia and Austria took place in the First Silesian War near Tschaslau .

From 1850 the city was the seat of a district court ( judicial district Časlau ). 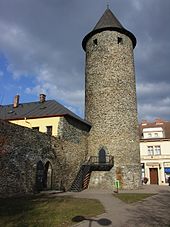 Tower of the city fortifications

Locally which operates Air Force of the Czech Army the military airfield Čáslav .

In the place worked and lived

Jan Karafiát (1846–1929), Czech pastor of the Bohemian Evangelical Brother Church and writer, was administrator at the Evangelical Seminary from 1872 to 1873