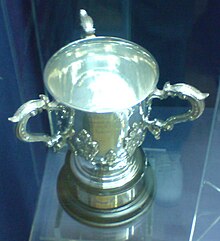 The trophy of the EFL Cup

The EFL Cup (until 2016 Football League Cup , currently called Carabao Cup through name sponsorship ) is a cup competition in English football . Like the better known and more prestigious FA Cup , it is played in the knockout system . Unlike in the FA Cup, only the 92 members of the English Football League , which organizes the competition itself, and the clubs of the Premier League are eligible to start. The winner of the EFL Cup qualifies for the UEFA Europa League (until 2008 for the UEFA Cup).

In terms of importance, the EFL Cup is clearly overshadowed by the FA Cup and was also mocked at the time of sponsorship by the brewer Worthington & Co. , the Worthless Cup (in German: "Worthless Cup"). The derogatory term Mickey Mouse Cup is also in use . The top clubs tend to use reserve or youth players in EFL Cup games.

Format of the competition

With the exception of the semi-finals, the encounters are individual games which, in the event of a draw , will be decided in a penalty shoot-out after 90 minutes . The winners advance to the next round of the competition.

A preliminary round is only played if the number of clubs taking part in the European competitions influences the number of byes for clubs in the second round and thus does not lead to more byes in the first round (see also the regulations for this) in the first and second round). The games are usually played between clubs at the bottom of the table in the fourth division, i.e. Football League Two , and usually relate to the clubs that have just been promoted from the fifth division, the Conference National .

All clubs in the English Football League (EFL) , i.e. the second to fourth leagues ( Football League Championship , Football League One and Football League Two), enter the cup in this round, provided they do not participate in the UEFA Europa League . Previously played winners from the preliminary round complete the field of participants. Sometimes it is necessary, because of the clubs active in Europe, to distribute a first-round bye for one or more clubs. This could be the case when (or not) EFL clubs have qualified in Europe and when a previous preliminary round was a better way to construct an even number of games. The clubs that can get a bye this way are the highest ranked clubs in the EFL. As a rule, these are the clubs that have just been relegated from the Premier League.

In the first round, the clubs are assigned to the northern or southern region, although this does not always result in two equal parts, so that one of the parts prevails. Half of the clubs are seeded in each area and it is determined whether the seeded club has to play a home or away game. In the next step, one of the unset clubs from the same region is drawn as opponents.

In addition to the winners of the first round, the Premier League clubs are now entering the competition. This does not apply to all clubs participating in the UEFA Champions League or Europa League.

All clubs that take part in the Champions League or Europa League now enter the competition and complete a field of 32 clubs with the winners of the second round.

Round of 16 and quarter finals

Both rounds are played in the knockout system. The same rules apply as before.

The four winners of the quarter-finals take part in this round.

The two matches will be played in two games each, with each club playing a home and an away game against its opponent. The winners, determined by adding up the two game results, move on to the final. If the added result leads to a draw, the game will be decided on penalties. The away goals rule has been removed from the EFL Cup since the 2018/19 season and a tie immediately leads to a penalty shoot-out. The final game is an exception

The two winners of the semi-finals will compete against each other in the final at Wembley Stadium and determine the winner of the EFL Cup.

The English federation is currently awarding a starting place for the Europa League to the EFL Cup winner. Instead of being sixth in the Premier League, he takes on the third qualifying round of the Europa League.

Should the EFL Cup winner be otherwise, e.g. For example, to qualify for an international competition by winning an international title or by reaching at least 5th place in the Premier League, then it is not the losing finalist, but another Premier League participant, generally the sixth in the table, who moves up. But if there is a successor through the FA Cup, the table seventh is usually nominated for the Europa League.

During the 1950s, the major English clubs added floodlights to their stadiums . This gave them the opportunity to use the evenings on weekdays in winter too. The introduction of the Football League Cup, abbreviated League Cup, in the 1960/61 season was a direct reaction to this development and was explicitly introduced as a competition that was played in the middle of a week under floodlights. In the beginning, the League Cup was rejected by many clubs and it was solely thanks to the ability to qualify for the UEFA Cup that all clubs later took part in the competition.

Liverpool FC is the record holder with eight wins and was even able to win the cup four times in a row in the 1980s. The last win came in 2012 against Cardiff City .

Since 1982 the EFL Cup has been held under a changing name of the current sponsor:

The following teams have won the EFL Cup once: