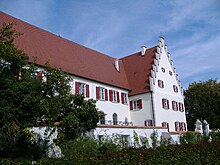 The city lies on the Danube between Günzburg and Dillingen an der Donau .

The castle town of the Staufer period experienced a heyday in the Middle Ages , which is still reminiscent of the cityscape today.

Gundelfingen is located on the edge of the Swabian Alb in the Danube Valley, whose extensive meadow, reed and moss landscape ( Swabian Donaumoos ) extends to the southern area of ​​the city. The town center is traversed by three arms of the Brenz . The Danube flows past the city in the south and is dammed up into a reservoir .

Neighboring communities are the cities of Lauingen (Danube) and Günzburg as well as the communities of Bächingen an der Brenz , Haunsheim , Medlingen and Offingen . 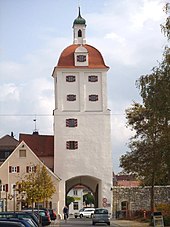 Sculpture with a former inn

The first documentary mention is dated around 750. Gundelfingen received town charter in 1220. During this time, the town wall was built with three gates, of which the “lower gate” is still preserved today.

The year 1462 marked an important point in the history of the city: The city successfully fought against a siege by the imperial army under Margrave Albrecht Achilles of Brandenburg-Ansbach . In recognition of the city, Duke Ludwig the Rich then awarded extensive estates, tax breaks and a letter of arms. This authorized the city to include a third of the Bavarian coat of arms in its own.

After the Landshut War of Succession , the city was incorporated into the Duchy of Palatinate-Neuburg in 1505 . Gundelfingen has belonged to Bavaria again since 1777.

On May 1, 1978, the previously independent communities Echenbrunn and Peterswörth were incorporated.

The city council has 20 members. Since the local elections on March 15, 2020 , the seats have been divided into the following lists:

The city is well known for its medieval festivals, which take place at irregular intervals for several days, as well as its carnival activities . Another traditional festival is the “Schnellefest” of the Gundelfingen town band, which takes place every year in July. On two weekends in summer, the international handball tournament with regularly more than 100 participating teams from different divisions takes place on the sports grounds of TV Gundelfingen.

Gundelfingen an der Donau and the surrounding area from the air

Gundelfingen is close to the Ulm / Elchingen motorway junction (A 8 / A 7). The two motorways can each be reached in around 15 minutes. The B16 is bypassed by the city. Gundelfingen is on the Ulm – Donauwörth Danube Valley Railway and has a train station that is served by agilis trains. The Danube Cycle Path leads through the city. Gundelfingen Airport (EDMU) is located on the northern outskirts of the city .

Municipalities in the district of Dillingen an der Donau